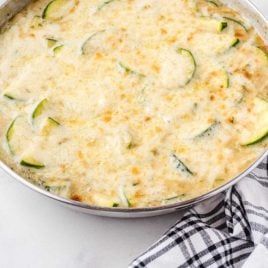 Zucchini gratin is made with tender half-moons of zucchini in a creamy, cheese sauce to create a flavorsome baked dish that showcases the flavors of this underrated low carb vegetable.
Jump to Recipe 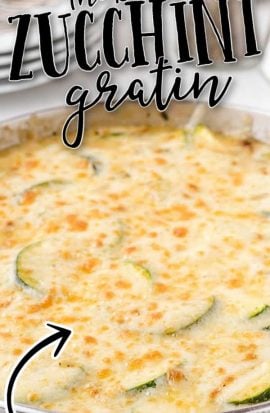 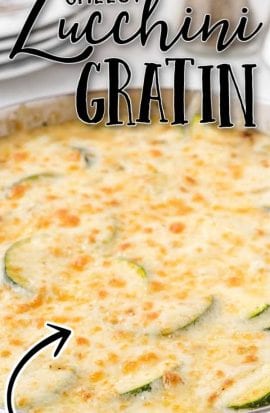 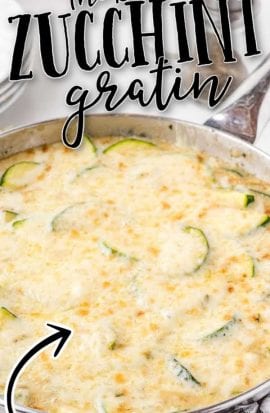 Zucchini gratin is a simple yet elegant side dish made with sauteed zucchini in a flavorsome cheese sauce. A tasty alternative to potato gratin, it’s easy to make in just a single skillet. The whole family will love this dish, even your picky eaters.

We like to serve this cheesy zucchini gratin with meats like Parmesan Pork Chops or grilled chicken breast, although it would also go perfectly with a fish or vegetarian main dish. We have easy recipes for both to help you out including salmon, mac and cheese or baked ziti.

PRO TIP: Don’t slice the zucchini too thin or it will fall apart while cooking.

YELLOW ONION: For a more delicate onion flavor, you could swap the yellow onion for a small red onion or three shallots.

MONTEREY JACK CHEESE: You could use any hard yellow cheese for this recipe, such as Colby, Gouda, Edam, or Cheddar cheese.

BREAD CRUMBS: You could opt to top your zucchini gratin with a little bit of regular or panko breadcrumbs if you wish.

YELLOW SQUASH: An interesting variation on this simple recipe would be to switch half of the sliced zucchini for yellow squash or any other kind of summer squash.

HOW TO MAKE THIS ZUCCHINI GRATIN RECIPE

STEP ONE: In a large ovenproof skillet over medium heat, add the butter and onions. Cook for about ten minutes, until the onions begin to caramelize. Then add the garlic paste.

STEP TWO: Add zucchini slices and stir well. Cook for five minutes, stirring often until the zucchini is soft enough to pierce with a fork.

PRO TIP: The sauce is a bit runny in this recipe. I prepared it this way to allow for you to spoon the cream sauce over meat, potatoes, or rice. If you want a thicker sauce, add 1 tablespoon to the beef broth and whisk together before adding it to the skillet.

STEP FOUR: Allow the sauce to bubble slightly, then add in the Parmesan cheese and a quarter cup of the Monterey Jack cheese. Stir well until the cheese has melted, then turn down the heat and simmer on low heat for three to four minutes.

STEP FIVE: Top with the remaining shredded cheese and place the skillet under the broiler. Broil for three to four minutes, or until the cheese is hot, bubbly, and starting to turn golden brown.

PRO TIP: Watch closely to make sure that the cheese doesn’t burn. It will only take a couple of minutes for the cheese to brown up.

STEP SIX: Remove from the oven and serve.

This is a wonderful dish to make for a dinner party. It is elegant and delicious and no one will know that the entire recipe took very little time to make. Serve alongside a delicious main course such as chicken marsala or French onion pork chops.

IN THE FRIDGE: Cooked zucchini au gratin can be stored in the fridge for up to three days in a sealed container. Reheat in the oven for 15 minutes before serving.

IN THE FREEZER: While it’s possible to freeze zucchini gratin, it’s not recommended as the zucchini would go a little mushy.

Zucchini au gratin is a delicious casserole that is quick and easy to make. Made with scallops of zucchini in a cheesy and creamy sauce, this perfect side dish goes well with all kinds of meat and fish dishes. What a great way to use up lots of zucchini from your garden during the summer months.

Can I freeze zucchini gratin?

This delicious recipe can be frozen although zucchini tends to get a bit mushy after freezing.

Can I use a different cheese than Monterey Jack?

You have plenty of options to use for the melted cheese in the cheesy white sauce. Try cheddar, gouda or gruyere cheese for tasty choices.

I don’t have an ovenproof skillet, can I use a different pan?

You could cook your recipe in a large skillet and transfer the ingredients to a baking dish right before you put it in the oven to melt the cheese.

From Recipe Developer: The sauce is a bit runny in this recipe. I prepared it this way to allow for you to spoon the cream sauce over meat, potatoes, or rice. If you want a thicker sauce add 1 tablespoon to the beef broth and whisk together before adding it to the skillet. TIP: Don’t slice the zucchini too thin or it will fall apart while cooking. TIP: Watch closely to make sure that the cheese doesn’t burn. It will only take a couple of minutes for the cheese to brown up. 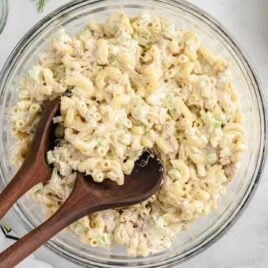 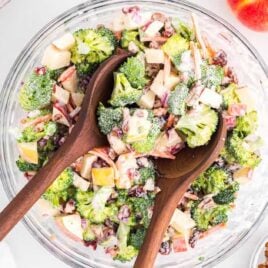 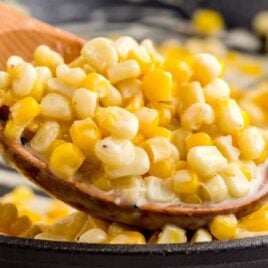