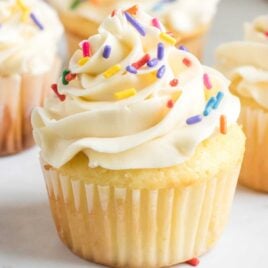 You'll love these amazing, quick vanilla cupcakes -- they taste gourmet because they're made with instant vanilla pudding resulting in a rich and creamy texture.
Jump to Recipe 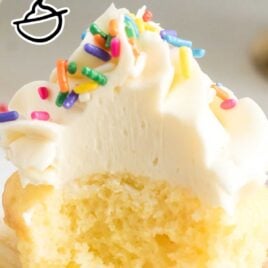 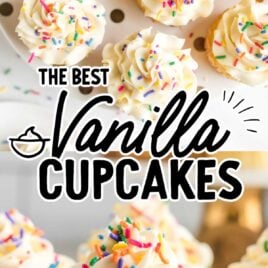 The secret to these soft and fluffy vanilla cupcakes is the creamy combination of cake mix, sour cream, and instant vanilla pudding. Plus, they are topped with a thick, easy, 3-ingredient vanilla frosting that makes them taste like they are straight from the bakery.

SOUR CREAM: In place of the sour cream in these homemade vanilla cupcakes, you could substitute Greek yogurt.

CHOCOLATE CUPCAKES: It would be easy to make a chocolate version of these moist cupcakes. Replace the white cake mix and vanilla pudding with the chocolate equivalent of both.

CAKE MIX: In place of the white cake in this easy recipe, you could also use vanilla cake mix for added vanilla flavor.

CAN I SUBSTITUTE BUTTERMILK? If you don’t have buttermilk on hand, you can make your own. To make 1 cup of buttermilk substitute, add 1 tablespoon of vinegar to a liquid measuring cup. Fill to the 1-cup line with milk, and then stir.

How to Make the Best Vanilla Cupcake Recipe

STEP ONE: In a mixing bowl, whisk together the cake mix and the vanilla pudding.

STEP TWO: In a separate bowl, mix together the eggs, oil, milk, and sour cream.

Make sure your ingredients are at room temperature to keep your batter an even consistency.

STEP FOUR: Divide the cupcake batter among 24 cupcake liners in your cupcake pan. Fill each cupcake liner halfway with the batter.

Using an ice cream scoop is a great way to measure your cupcake batter into the paper liners and the easiest way to minimize the mess.

STEP FIVE: Bake at 350°F for 20 minutes until a toothpick inserted into the center of the cupcake comes out clean. Remove from the oven and let cool on a wire rack. While they are cooling, make the frosting.

STEP SIX: In a stand mixer fitted with the whisk attachment, or using a hand mixer, combine the butter, powdered sugar, and vanilla.

STEP SEVEN: Turn on low speed and mix until all the powdered sugar is incorporated into the butter.

STEP EIGHT: Turn on high and whip for 30 seconds until the frosting is light and fluffy.

STEP NINE: Frost the cooled cupcakes and top with sprinkles if desired.

If you want a bakery perfect swirl of frosting on top, use a pastry bag or fill a Ziploc bag with frosting, snip the corner off, and use it as a piping bag, going in little circles to create a swirled design.

How to Serve Vanilla Cupcakes

Serve these classic vanilla cupcakes as a sweet treat for dessert or at a party. Add festive sprinkles to match any occasion. Add a scoop of vanilla ice cream on the side.

If you’d like to serve a tray of amazing cupcake flavors, these recipes for cherry cupcakes, Pepsi cupcakes, and Boston cream cupcakes are perfect.

How to Decorate a Vanilla Cupcake

The best way to decorate your cupcakes is to pipe frosting on top. Once your frosting is made, you can add it to a piping bag fitted with a decorator’s tip. Then you can get creative by piping swirls onto your cupcake. 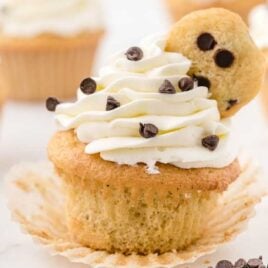 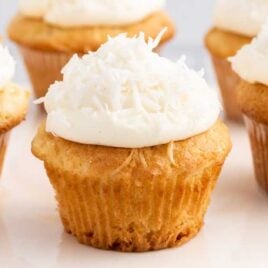 IN THE FRIDGE: Because of the butter in the frosting, these homemade cupcakes are best stored in the refrigerator in an airtight container.

IN THE FREEZER: You can freeze frosted cupcakes for up to three months. They are best stored each in their own container so that the frosting doesn’t get squashed. For the best results, freeze the cupcakes without the frosting and frost them when you are ready to serve.

Why are my vanilla cupcakes dense and crumbly?

There are a few reasons why cupcakes come out dense or crumbly. First, make sure your ingredients are at room temperature. They will not incorporate properly if they are not all at the same temperature. Over mixing the batter can also cause dense cupcakes. Third, opening the oven door before the cupcakes are ready can cause them to sink due to the rush of cold air.

How do I store cupcakes?

These easy vanilla cupcakes are best served the day they are made but can be kept in an airtight container at room temperature or in the fridge for up to 3 days. Freezing cupcakes is best done before adding the frosting, and they can be kept in the freezer for up to 2 months.

How do I achieve moist cupcakes?

To ensure your cupcakes are moist, make sure not to overbake them. Storing them in an airtight container will also ensure they maintain their moisture.

What is the secret to a moist cupcake?

The secret to moist cupcakes is creating air bubbles in your batter that expand in the oven. Once the ingredients are mixed together, stop the mixer. If you overmix your batter, you will collapse those bubbles and end up with dense cupcakes.

Can I make cupcakes ahead of time?

You can make cupcakes up to 2 days ahead of time and store them in an airtight container on the counter. Wait to frost them until the day you plan to serve them.

Can I use this batter to make a cake?

This cupcake batter can also be used to bake a cake. You will have to adjust the baking time for the cake, but otherwise, there is no difference between making cupcakes and making a cake.

How long to bake cupcakes?

Bake cupcakes for 20 minutes or until a toothpick inserted into the center comes out clean. 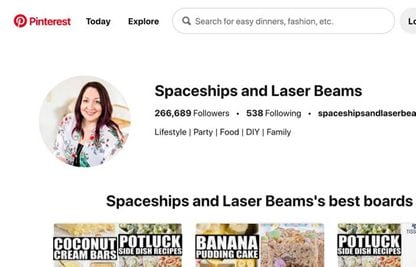 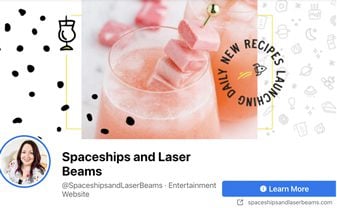 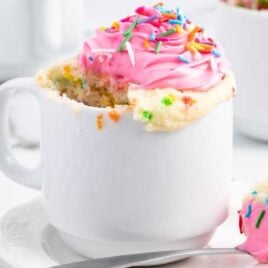 Cupcake in a Mug 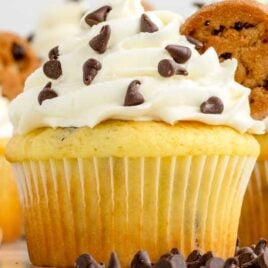 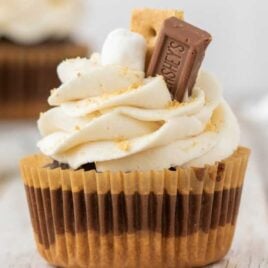