This million dollar spaghetti is a loaded, baked casserole filled with spaghetti noodles arranged in layers with cheese and meat sauce.
Jump to Recipe 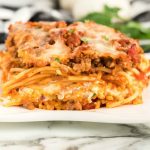 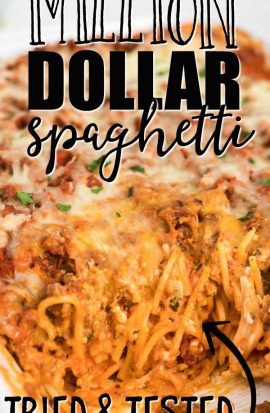 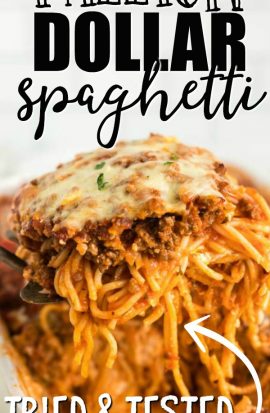 The best way to describe million dollar spaghetti is that it combines spaghetti and lasagna into one epic casserole. It’s loaded with spaghetti noodles arranged in layers with cheese and meat sauce. It’s one of those classic casseroles that are baked in one dish and only have a few ingredients.

You can never have enough casserole recipes, and this one tops our list along with Doritos casserole & Mexican casserole. 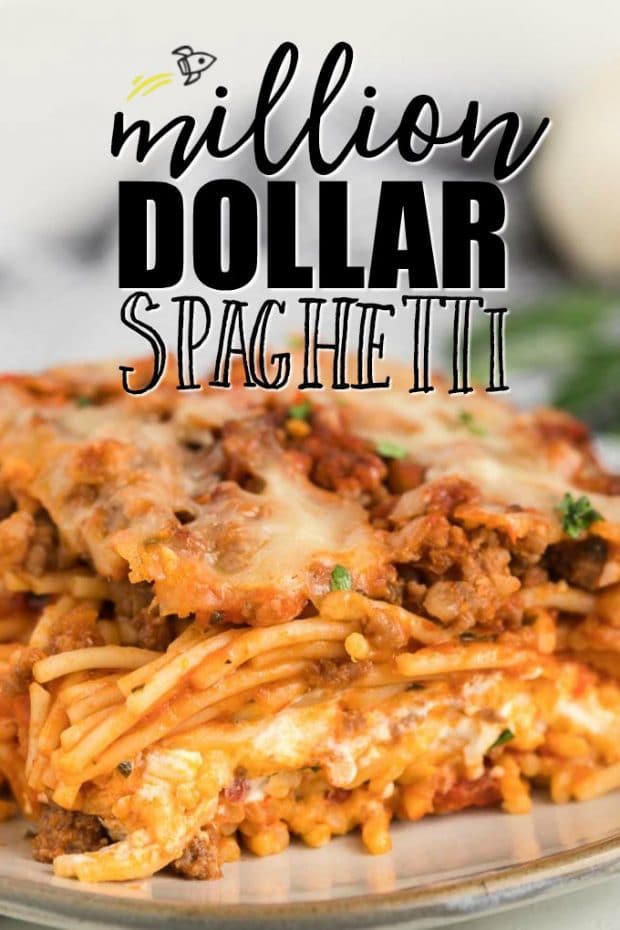 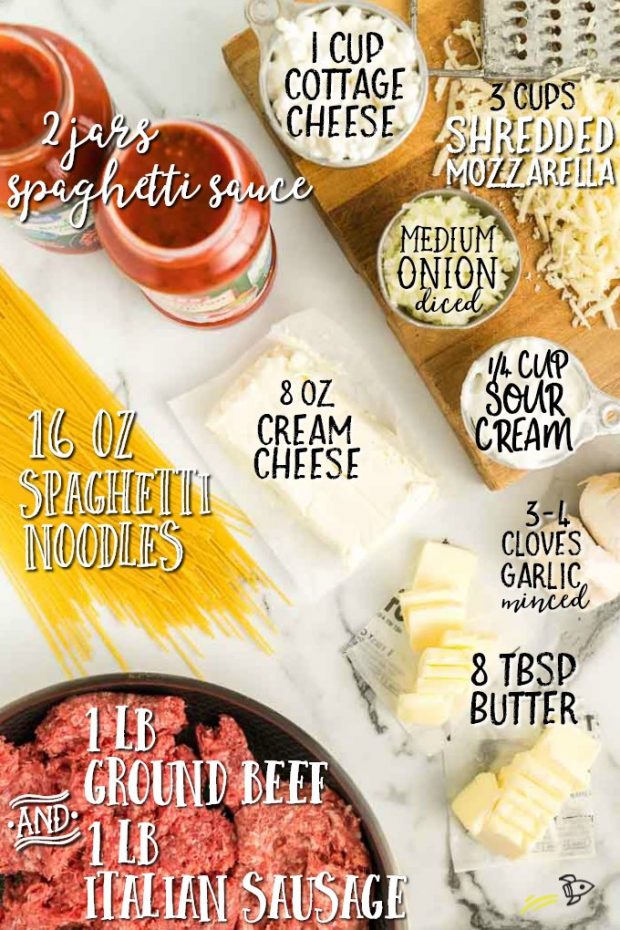 MEAT: This recipe uses ground beef AND Italian sausage. But if you’re partial to one, you can use 2 pounds of your preferred meat.

NOODLES: Mix it up and use your favorite noodles in this recipe — instead of spaghetti noodles, you can use medium-sized pasta like elbow macaroni or ziti.

How to Make Million Dollar Spaghetti

PRO TIP: This recipe is arguably even BETTER as leftovers! Try making two at a time and freezing one for a day when you won’t have time to cook dinner. 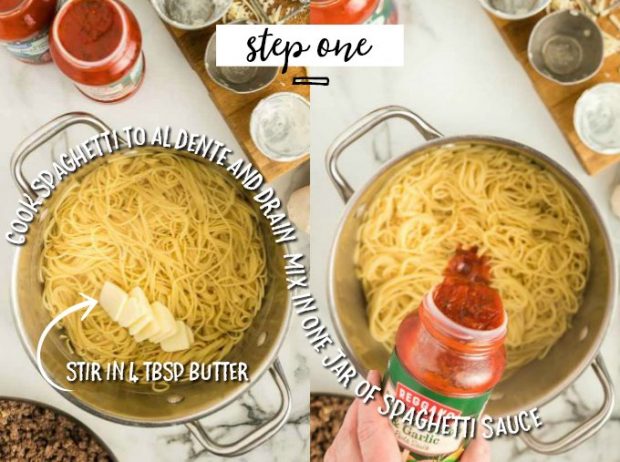 STEP ONE: Cook the spaghetti to al dente according to package directions (about 8 minutes). Drain the pasta and return it to the pot that it was cooked in. Stir in 4 tablespoons of sliced butter into the hot spaghetti. Add 1 jar of spaghetti sauce into the cooked noodles until they are coated. Set aside.

STEP TWO: In a large skillet, brown the ground beef, Italian sausage, and onions. Add the cloves of garlic and cook for one minute more. Drain any extra grease. Pour the remaining jar of spaghetti sauce into the meat mixture and stir. Set this aside as well. 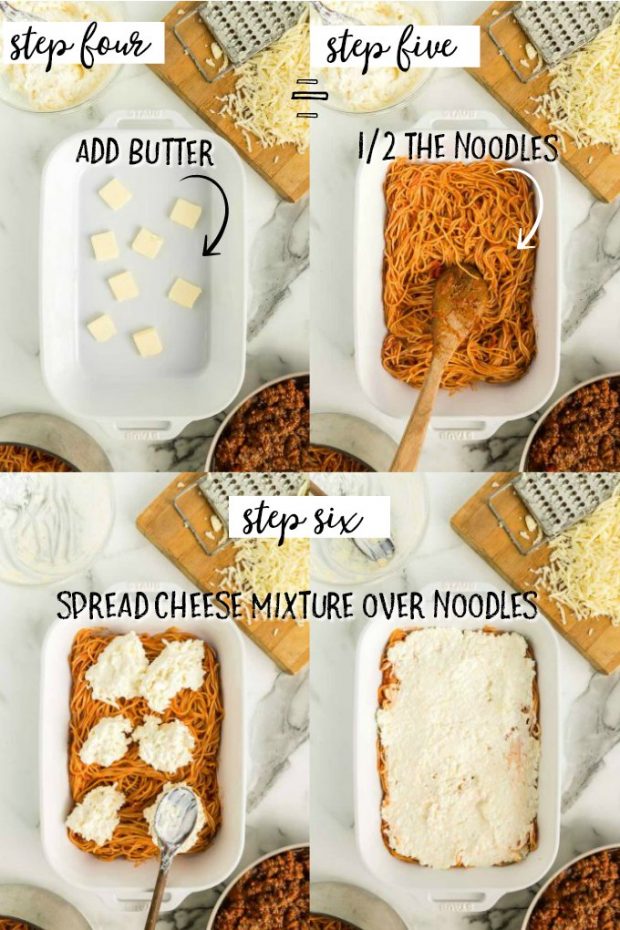 STEP FIVE: Next you’ll create the best part of Million Dollar Spaghetti: the layers of noodles, sauce, and cheese! Spread half of the spaghetti noodles in the bottom of the pan.

STEP SIX: Then spread the cheese mixture over the noodles. 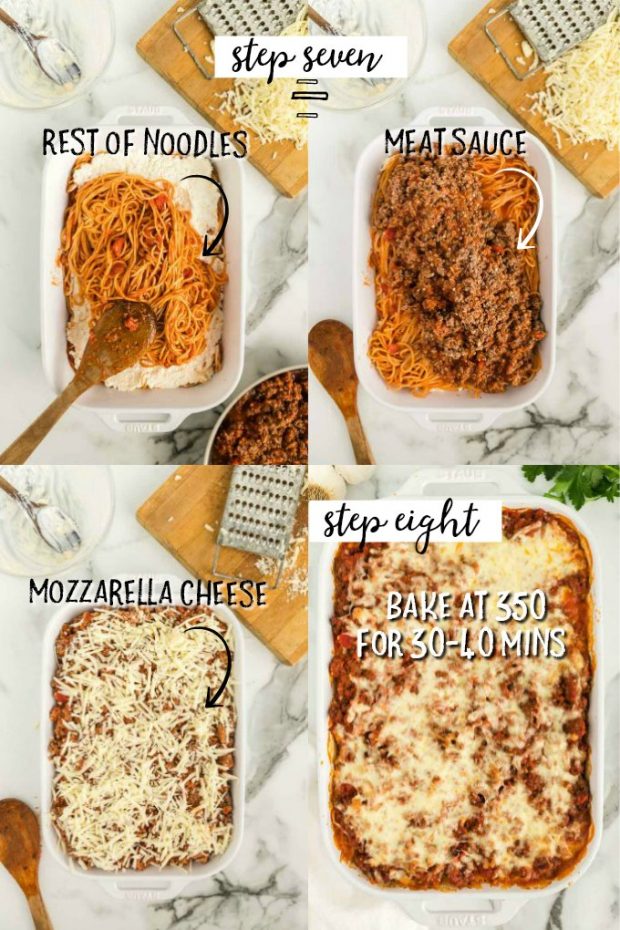 STEP SEVEN: Place the remaining spaghetti noodles over the cheese mixture and then pour on the meat sauce. Top with the remaining 1 ½ cups of mozzarella cheese.

STEP EIGHT: Bake at 350 degrees for 30 – 40 minutes, until the cheese is melted and barely golden brown. Let it sit for 5 – 10 so that it’s easier to cut when serving. Allowing it to cool will make it easier to slice. One of the best parts of making million dollar spaghetti is getting to slice it and see all of the amazing layers of cheese and noodles.

PRO TIP: Around the 30-minute mark, check to make sure your casserole isn’t overcooking. You’ll know it’s time to take it out of the oven when the edges are slightly brown and the cheese is melted (look for bubbles in the gooey goodness of the cheese)!

Million Dollar Spaghetti is easy to freeze. Store it in an airtight container or cover it in foil and freeze for up to 3 months.

When you’re ready to eat your casserole, bake it for an hour or defrost it in the fridge overnight and bake for 45 minutes. Keep an eye out for browned edges and melted cheese to know when it’s done. 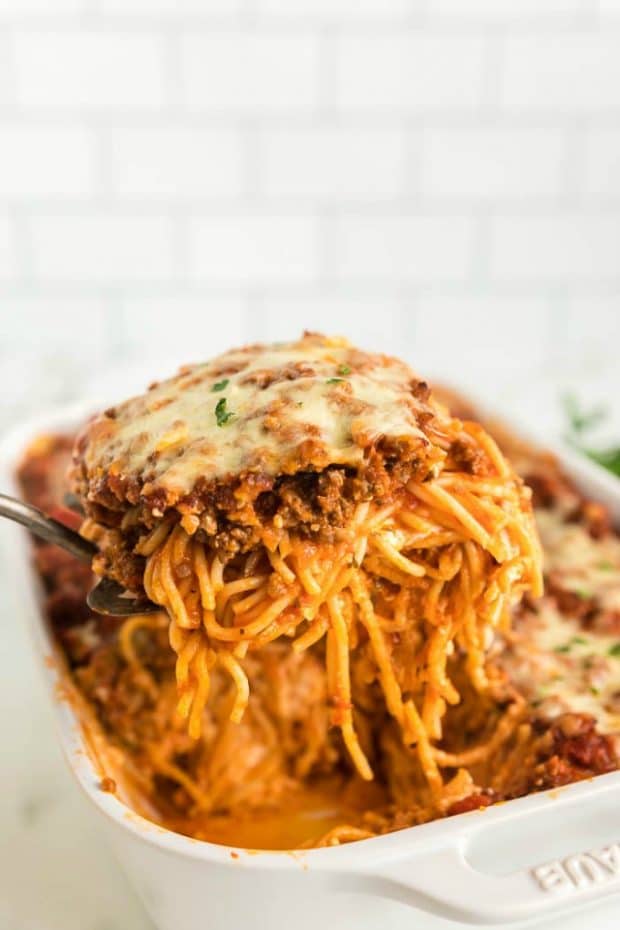 This Million Dollar Spaghetti recipe is a family favorite that’s a simple, budget-friendly dinner idea. Save this recipe for the next time you need to cook for a crowd or are craving a twist on classic spaghetti. 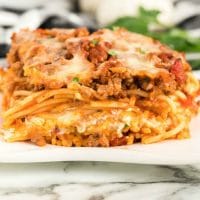