Easy to make with just bbq sauce, brown sugar, vinegar, and spices, slow cooker BBQ pulled chicken is a family favorite for summer dinners on the deck or melt in your mouth pulled chicken sandwiches any time of year!
Jump to Recipe
5 from 2 votes 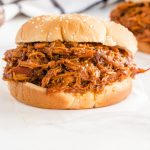 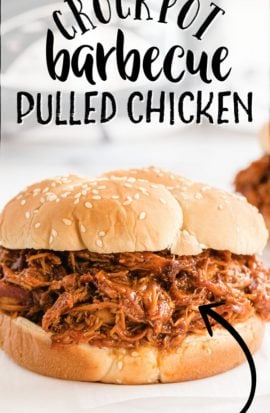 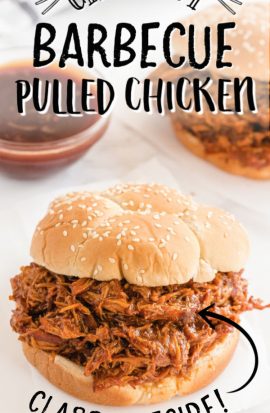 This slow cooker BBQ pulled chicken is incredibly easy to make. You just throw chicken breasts, barbecue sauce and spices into the Crock-Pot and wait until the chicken becomes fall-apart tender and juicy. Once added to buttered hamburger rolls it becomes a mouth-watering pulled BBQ chicken sandwich.

Great for an easy meal any night, or for a backyard picnic, serve this with sides like cauliflower mac and cheese or a simple cucumber salad for a classic summer meal.

If your chicken breasts are on the smaller side, use four instead of three for this recipe.

BARBECUE SAUCE – There are so many great BBQ sauces to choose from. We also love Sweet Baby Bay’s Honey Barbecue Sauce, or you can use your own favorite brand.

SLOW COOKER – This pulled BBQ chicken recipe uses a slow cooker. You can use any size of Crock-Pot, Instant Pot or any other slow cooker brand.

HOW TO MAKE PULLED BBQ CHICKEN IN A SLOW COOKER

STEP ONE: Place the chicken breasts in the slow cooker and turn the heat to low.

STEP FOUR: Place the lid on the slow cooker and cook on low for six to seven hours, or on high for three to four hours.

STEP FIVE: When the chicken is tender and pulls apart easily with a fork, it’s ready to be shredded. Use two forks to shred the chicken while still in the slow cooker. Mix the shredded chicken and barbecue sauce together until it’s well coated.

Leftover cooked BBQ pulled chicken can be stored in the refrigerator in an airtight for up to three days. When reheating, make sure it’s piping hot throughout.

BBQ pulled chicken can be frozen for up to three months in an airtight container.

What goes with pulled BBQ chicken?

A pulled BBQ chicken sandwich is a great alternative to a burger. Just add the BBQ chicken to a toasted and buttered hamburger bun. I also suggest topping your BBQ chicken with homemade coleslaw to add a nice crunch to an already delicious sandwich.

Sides that go great with pulled chicken sandwiches include Baked Mac and Cheese,

This pulled BBQ chicken slow cooker recipe is a great go-to for when you don’t have time to cook. You can just put the chicken, barbecue sauce and spices in the slow cooker in the morning and by dinner time it’ll take just a few minutes to shred the chicken and pop it onto a bun. You can batch cook this dish and keep it in the fridge or freezer to make an easy lunch to take to work or reheat for a lazy weeknight dinner. Either way it is delicious! 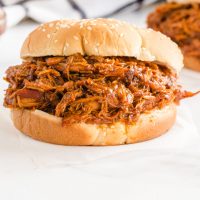 Tip: Do not cook chicken from frozen. Make sure the chicken is fully thawed before adding to Crockpot