Plus, take a peek at these dinosaur craft ideas. And don’t miss these amazing dinosaur birthday cakes!

The culmination is this post, chock-full of dinosaur party ideas. If you’re planning a dinosaur birthday party, you’re in luck.

I’ve brought together 30 dinosaur parties that you will love, as well as an additional 12 dinosaur party ideas at the end of the post.

The muted color palette of this gorgeous dinosaur-themed birthday by Sweet Empire really sets the stage for a dino adventure. Check out the fabulous feature it received on Sweet Designs by Amy Atlas.

From Chic Up Your Party

If you’re looking for dinosaur party ideas, this is the party you want to take a look at. Thrown by Chic Up Your Party – from food to activities – every single detail is covered, and beautifully photographed.

Karo’s Fun Land created this fun dinosaur-themed 4th birthday party for her twin nephews. They’re active, adventurous, and dinosaurs-loving, so it was the perfect theme for their 4th birthday.

From Piece of Cake Parties and Celebrations

How fun is the dessert table backdrop used at this dinosaur party? I love the 3D element. Piece of Cake Parties and Celebrations planned this party and no detail was left unattended – from this dessert table to the tablescapes, favors and more.

From Crissy’s Crafts via Pizzazzerie

6. Dinosaur Birthday Bash on a Budget

From Wild Rose Sweets and Styling via Spaceships and Laser Beams

It’s hard to believe that this dinosaur birthday party was part of our “Boy Bash on a Budget” Challenge. It looks anything but done on a budget. It was created by Wild Rose Sweets and Styling and was our very first entry, setting the standard for all of the fabulous entries that followed.

From Eka P. via Catch My Party

The kids had a blast at this dinosaur-themed birthday, featured on Catch My Party, mom organized a party where they got to play, dig, explore and have tons of fun.

From Rachelle via Spaceships and Laser Beams

Our fabulous customer, Rachelle, held this fun outdoor dinosaur birthday party for her son Madden at Dinosaur World in Florida. She says the whole event was a hit. After seeing the photos, I totally agree.

From Buggie and Jelly Bean

I seriously cannot get enough of the dinosaur tails on the chairs that are part of this dinosaur themed second birthday party by Buggy and Bean. The rest of the party is pretty awesome too!

Little Dance Invitations threw this dinosaur-themed fourth birthday party – her son is obsessed with all things dino. The entrance to the house was flanked by two massive MDF dinosaurs that are must-sees!

From A Reason to get Together via Spaceships and Laser Beams

Have a roaring good time and not break the bank with this budget friendly dinosaur birthday party full of amazing ideas. Burlaps and greens were paired with matching candy jars and of course dinosaurs!

This cute party turns Bugles into Dino Toenails!. Check out this and other fun details at this dinosaur-themed fourth birthday (dino-four!) by Gabriel Good Tidings.

Binoculars made out of toilet paper roles? Yes, please. LOVE the “dinoculars” made for this dinosaur party from Elephant Juice, which was featured on our blog.

From Amy L.B. Photography via Hostess with the Mostess

A feature on Hostess with the Mostess rewarded Amy L.B. Photography for her party planning efforts. She drew ideas from a variety of party planners and crafters all listed in the post.

From The Fabulous Mom Guide

Here’s another absolutely great dinosaur-themed fourth birthday parties. This one was planned by The Fabulous Mom Guide.

This dinosaur-themed party from The Celebration Shop has to be one of the prettiest I have ever seen. Who knew that was even possible?

Stunning. There’s no other word to describe this dinosaur-themed birthday party from Turtle Crafty Girl. I am pretty much in love with every single dino detail.

From A Little Polkadot via Love the Day

A little slice of party perfection. That’s what I would call this dinosaur party thrown by A Little Polkadot and featured by Love the Day.

From Mini Mocha via Spaceships and Laser Beams

Natasha of Mini Mocha created a gaggle of cardboard dinosaurs to celebrate her son’s birthday with some perfect homemade touches.

From The Inspired Occasion

Dinosaur gummies topping cupcakes – what a great idea. Check out more of this dinosaur-themed party from The Inspired Occasion.

From The Inspired Occasion

Sweet Designs by Amy Atlas is one of the best party resources. And The Inspired Occasion once again proved their dinosaur party prowess with a featured guest table on the Amy Atlas blog.

From 3’s a Party Candy Buffets and Party Supplies

Check out this dinosaur-themed dessert table from 3’s A Party Candy Buffets and Party Supplies. Lots of dino-mite ideas are incorporated.

From Pure Joy Events via Spaceships and Lasaer Beams

A dinosaur egg hunt was the focus of fun for this little boy’s fourth birthday party, which was planned by Pure Joy Events.

From The Princess and the Pirate via Spaceships and Laser Beams

Head back into time with this preshistoric dinosaur themed birthday party full of cavemen, dinosaurs and lots of treats. Guests can choose between a variety of healthy snacks like carrots, celery and oranges but can satisfy your sweet tooth with delicious macaroons.

Proving that dinosaur themes are universal, AR Party Planner threw this party for a dino lover in Brazil!

I love this natural history museum take on a dinosaur-themed party. It was created by Quaintly Garcia and also featured on Kara’s Party Ideas.

It’s always fun to see what your customers will do with your work. It’s one of my favorite parts of this job. And I love what this mom did at her son’s dinosaur second birthday party.

From Allison Lawson Cakes via Catch My Party

LOVE the backdrop idea for this dinosaur-themed dessert table by Allison Lawson Cakes!

Plus, don’t miss out on 12 Dinosaur Birthday Cakes we Love… 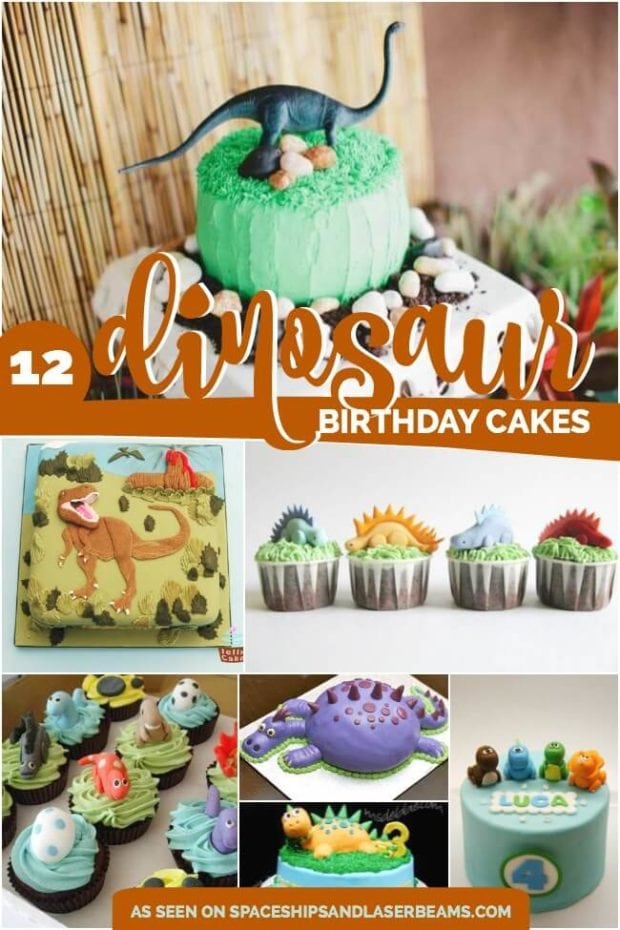