Who doesn’t love the idea of an emoji birthday party? Would you believe emoji birthday parties are totally on trend? Here are 21 of our favorite emoji party ideas. We’re dying over the poop emoji cupcakes, cakes, and cookies as well as all the cute party decorations and party supplies. We also love the DIY decoration ideas for creating emoji paper lanterns, masks, and even a photo booth. 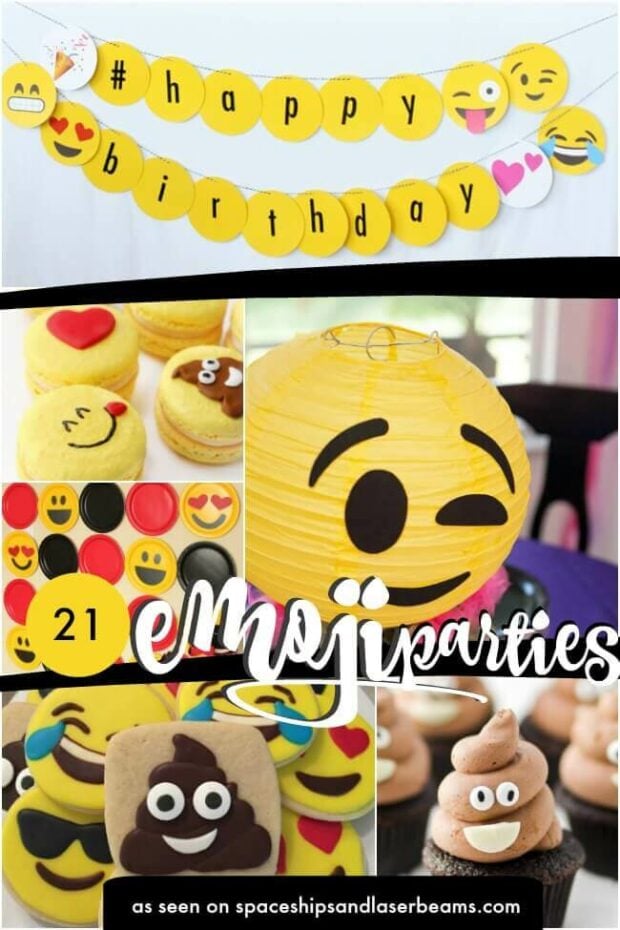 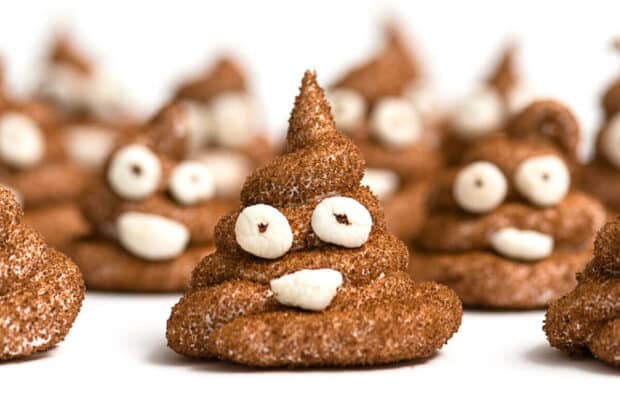 “Every party has a pooper”, or so the song goes. Now every party can have edible emoji Peeps poop too.  Learn how to make marshmallow Peeps shaped like the poop emoji (basically, marshmallows coated in brown sugar crystals). We have a feeling these might be the talk of the party! 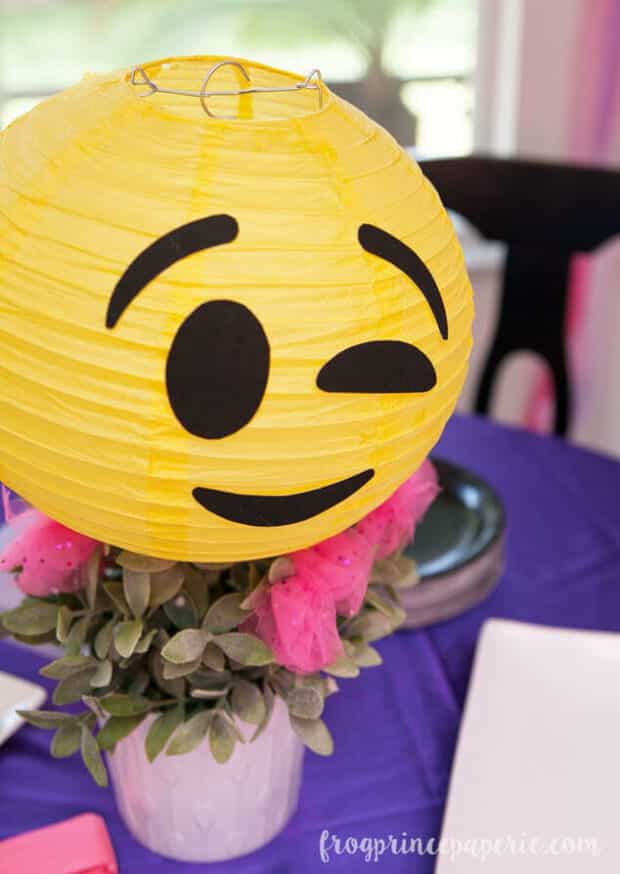 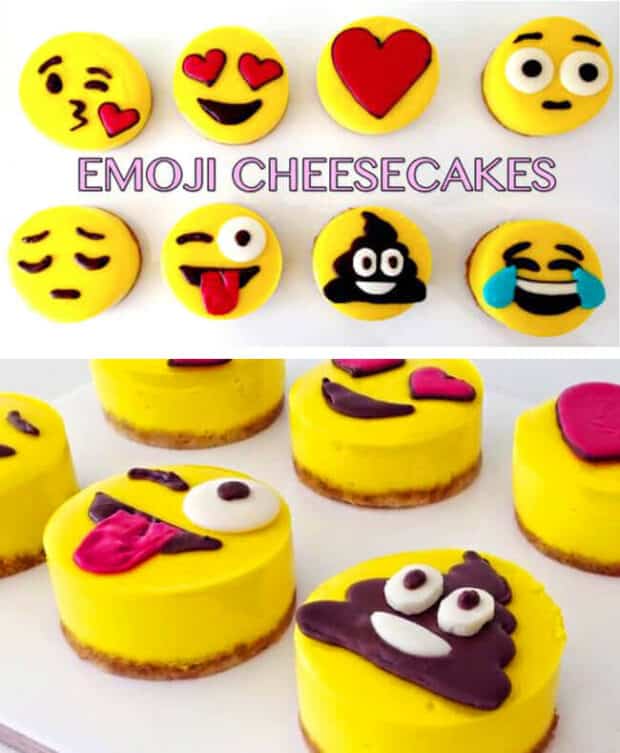 These emoji cheesecakes will bring a smile to party guests! Perfectly personal-sized cheesecakes are made yellow with a dash of gel food coloring and then topped with icing emojis. Follow the super easy step-by-step tutorial provided and bake up all sorts of fun. 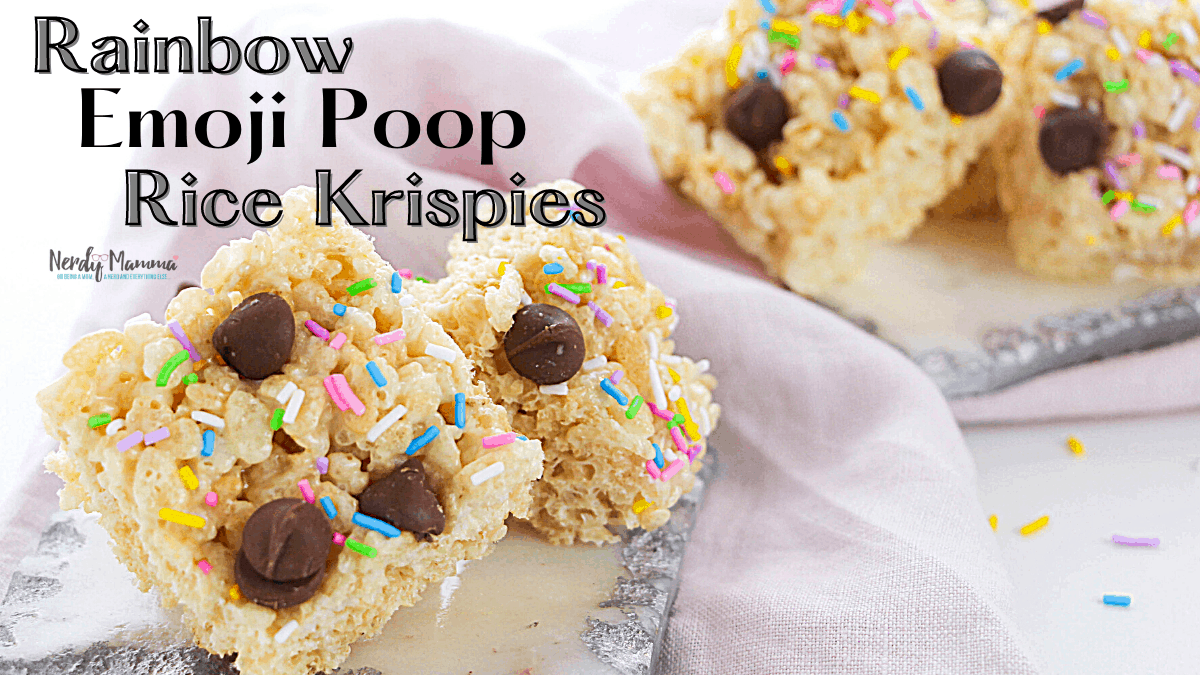 Never in your wildest dreams did you imagine you’d be looking up directions for making emoji poop rice Krispy treats, right? And yet here we are! These little beauties actually look pretty appetizing if we do say so. 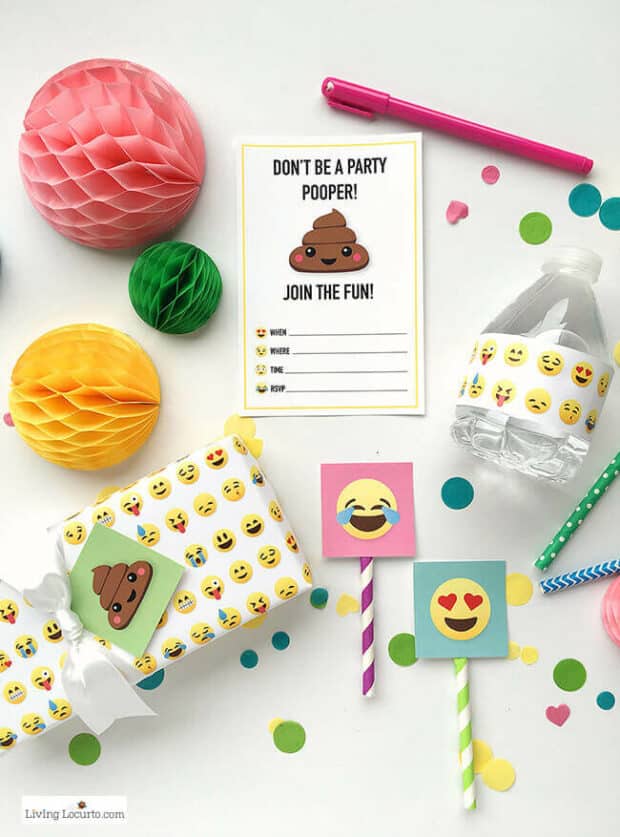 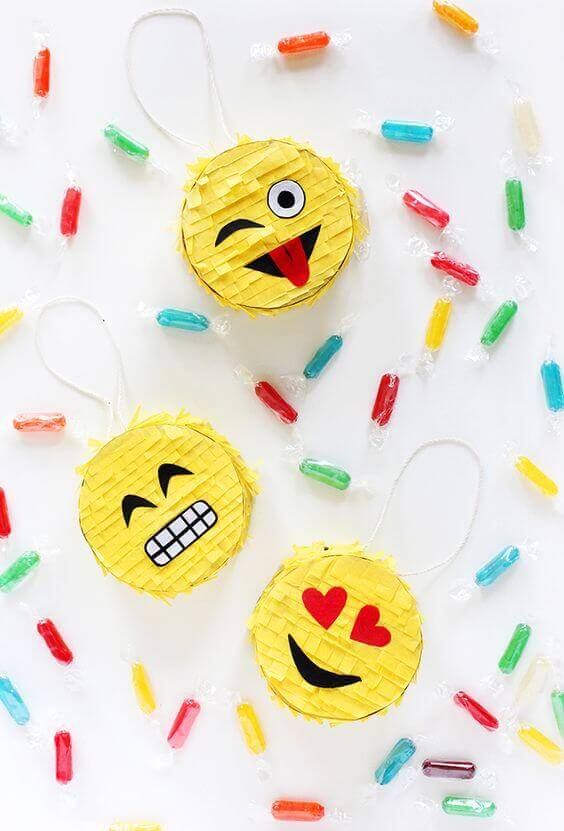 From I Spy DIY

An emoji party lends itself to some pretty awesome party favors. Are you wondering what our pick is for the best emoji party favor idea? Definitely these mini emoji pinatas. They are an awesome DIY project that even the birthday kid can help get ready. 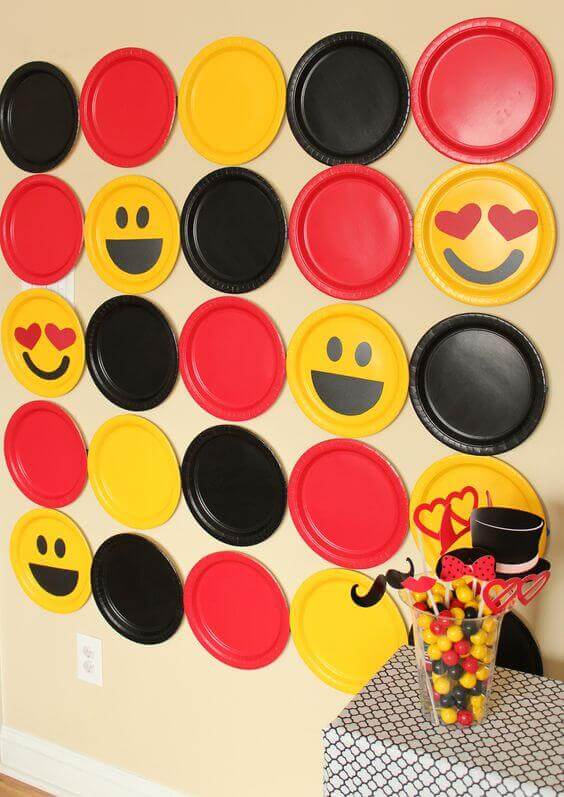 We are flashing all the heart’s eyes for this incredible DIY emoji photo booth backdrop. Made from yellow, red, and black paper plates and some emoji facial features cut from cardstock, it is quick and easy to hang with painter’s tape. 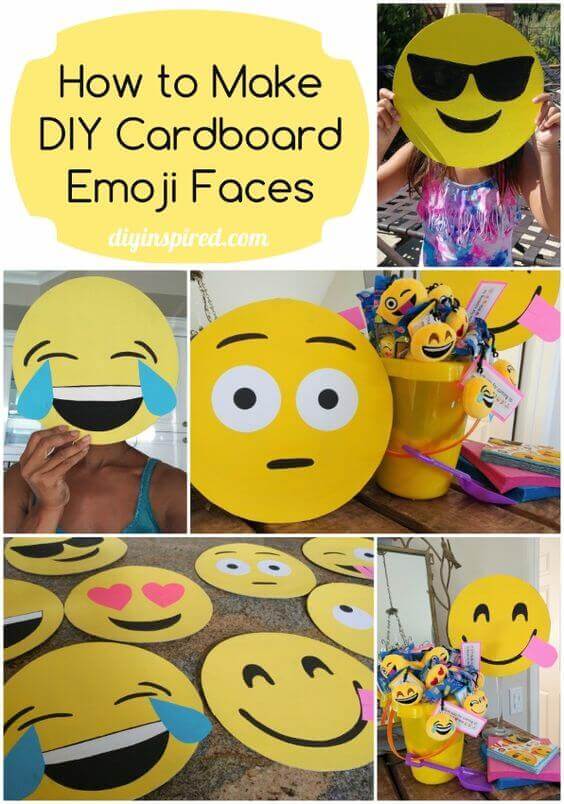 If you love to save money and aren’t afraid of a little DIY, these emoji masks are a fun addition to any emoji party. The inexpensive craft is perfect for decorating nearly any surface in your house, hanging from trees, or using it as photo props! The best part?  They are inexpensive and can be made with just a few basic supplies. 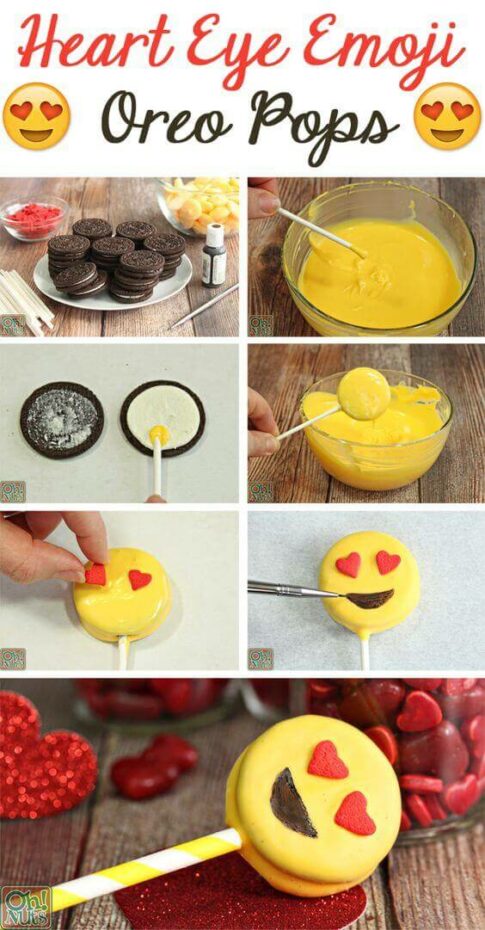 Might as well bring the emoji obsession into the kitchen. These emoji Oreo pops are so simple to make and can be prepared ahead of and stored in an airtight container until party day.  You’ll be getting all the heart eyes for these! 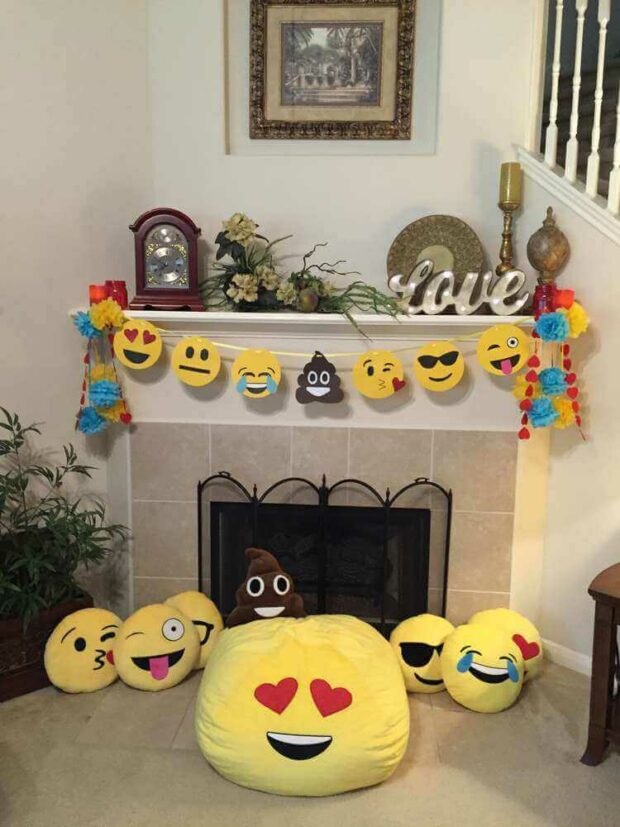 It just isn’t a party without a birthday banner! All you need to make this festive emoji garland is paper, a hole punch, a ribbon, and a little bit of time. Decorate with some tissue paper pompoms or paper streamers for added flare. Hang it up in your party space to bring all the feels (as the cool kids would say). 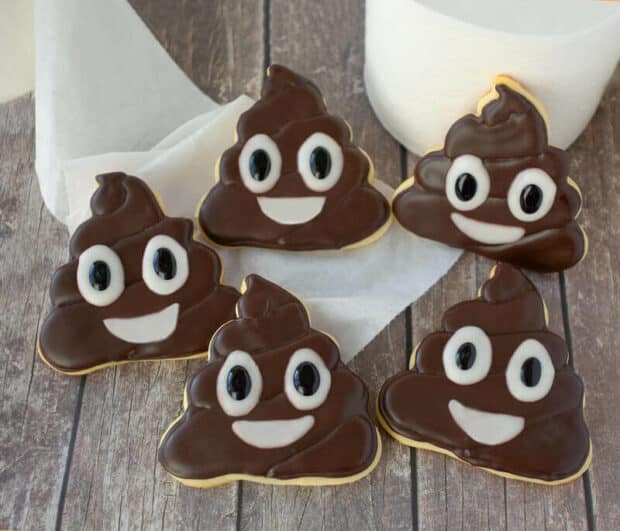 It’s all about the poop these days—the poop emoji, that is.  Check out these poop emoji cookies and add a little excitement to your emoji party dessert table. They are sure to be the hit of the party with guests young and old. 12. Pin The Face On The Emoji Game

Pin the Tail on the Donkey just got a facelift… an emoji facelift.  This twist on a classic game will bring plenty of smiles. 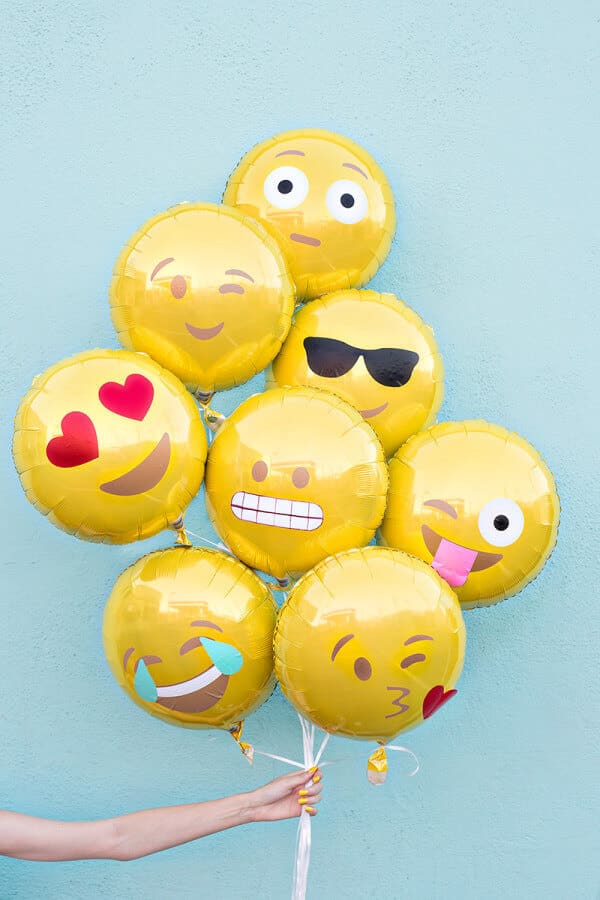 Helium balloons can get expensive quickly, especially any of the licensed designs. Give some inexpensive yellow balloons an emoji makeover. DIYing emoji balloons is easy!  Just cut out facial expressions from vinyl and add them to yellow Mylar balloons. 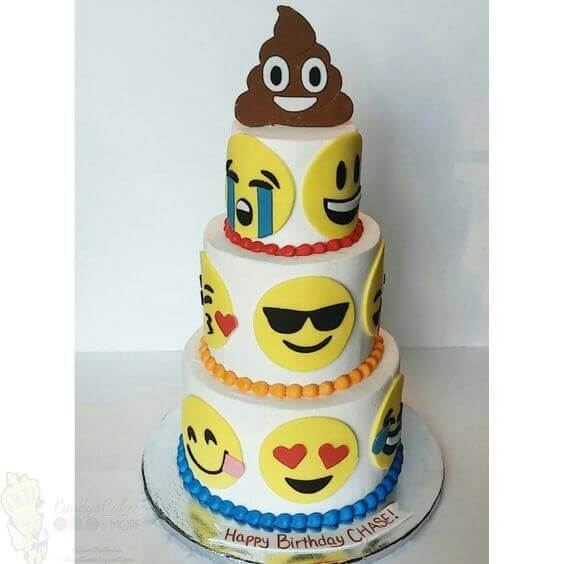 The birthday boy or girl of honor deserves an impressive birthday cake. We love this idea for an emoji cake! Create emoji faces from fondant and add them to simple white frosted cake tiers. You can use your child’s favorite emojis or mix them up with all the crazy faces you can think of. 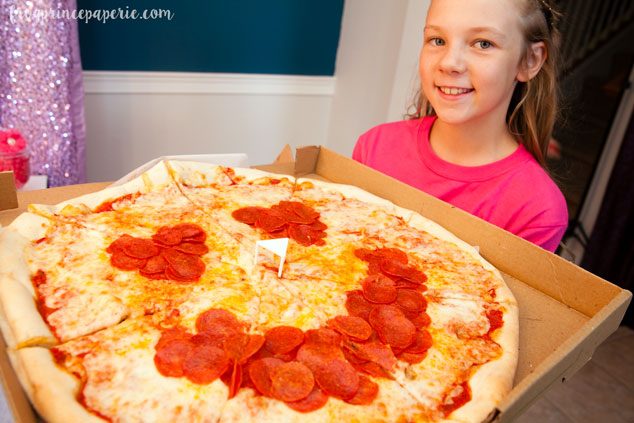 Are you looking for an easy emoji party food idea? This one is as easy as it gets — emoji pizza! Ask your pizza place to arrange the pepperoni into an emoji face or have the birthday party guests make personal pizzas and create their own emoji faces. 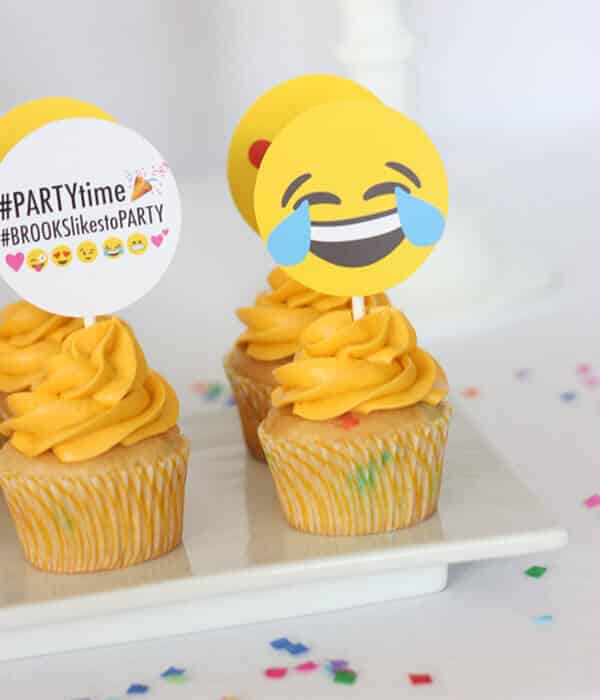 Printable toppers are one of the easiest ways to dress up cupcakes! Whether you place them on top of store-bought cupcakes or homemade desserts, these emoji toppers are an especially fun way to tie in the emoji party theme. 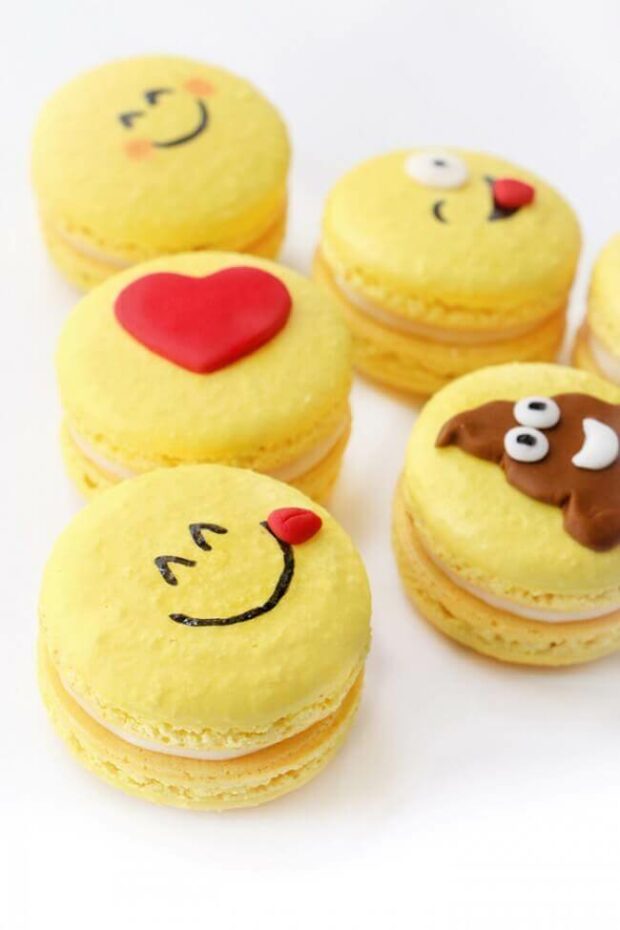 If you didn’t think the French macaron could be improved upon, guess again. We are pretty sure emoji French macarons just one-upped every other kind of macaron. Learn how to make them for your emoji party! 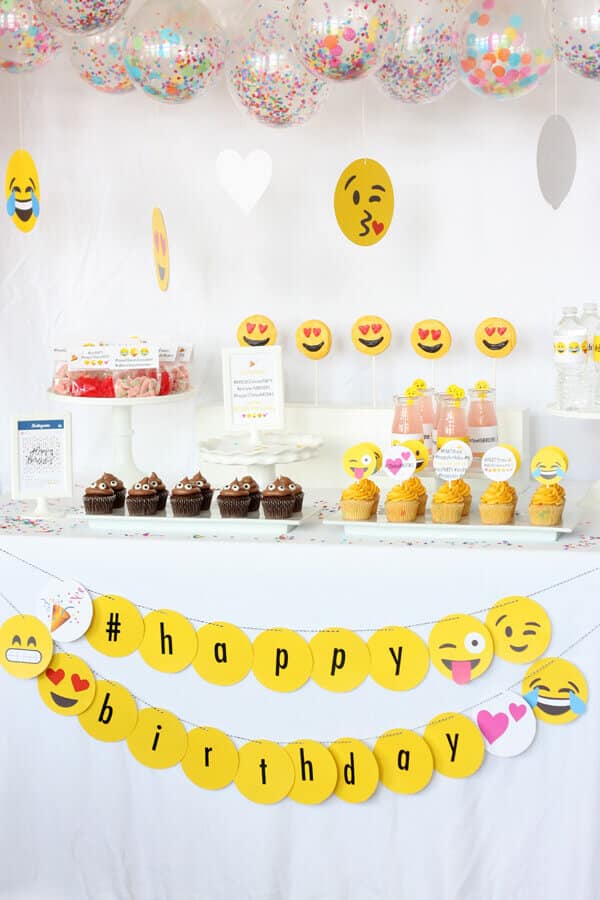 Talk about an expressive table! This emoji party dessert table incorporates some of the most popular emojis and makes them edible. The table is covered with a simple white tablecloth, decorated with a fun emoji banner, and topped with an assortment of tasty emoji goodies. 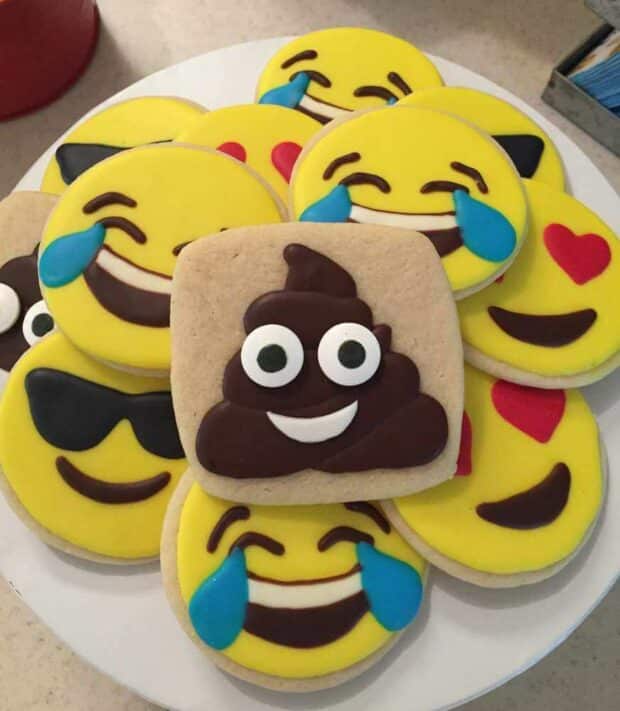 Cookies are a dessert table staple. Whip up your favorite sugar cookie recipe and check out these emoji cookies for inspiration on decorating them! Now you can eat your feelings. 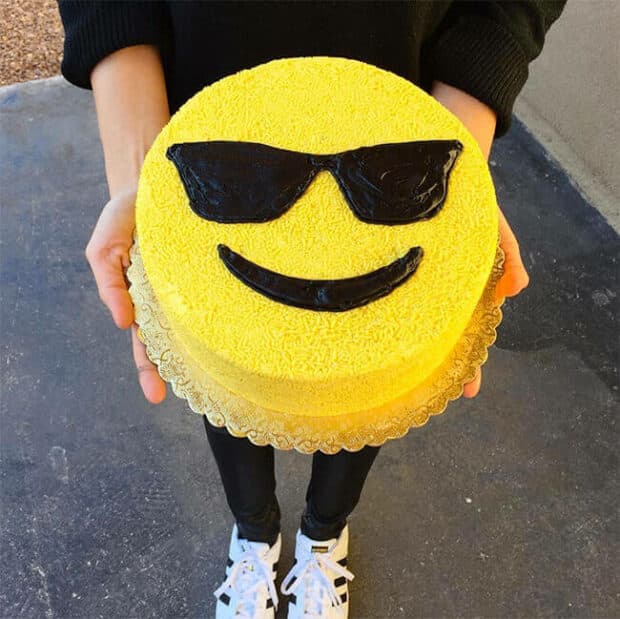 If you love a simple cake that wows, this emoji sprinkle cake is a winner. It looks easy enough for kids to help decorate, too. Simply ice any flavor round cake, then pat yellow sprinkles all around. Top with a black fondant face to transform it into your favorite emoji. 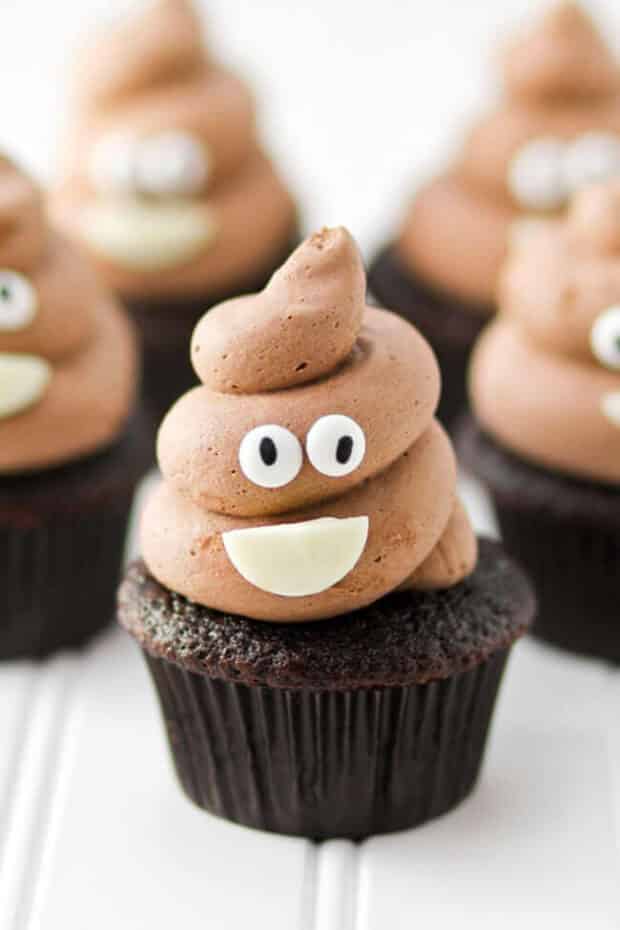 We are not certain what it is about the poop emoji that makes it so popular, but it is the perfect picture to express dissatisfaction with anything negative about life. One thing is for certain, these poop emoji cupcakes won’t bring negativity. In fact, we are pretty certain they will bring just the opposite.

Plus, check out 15 Train-Themed Birthday Parties 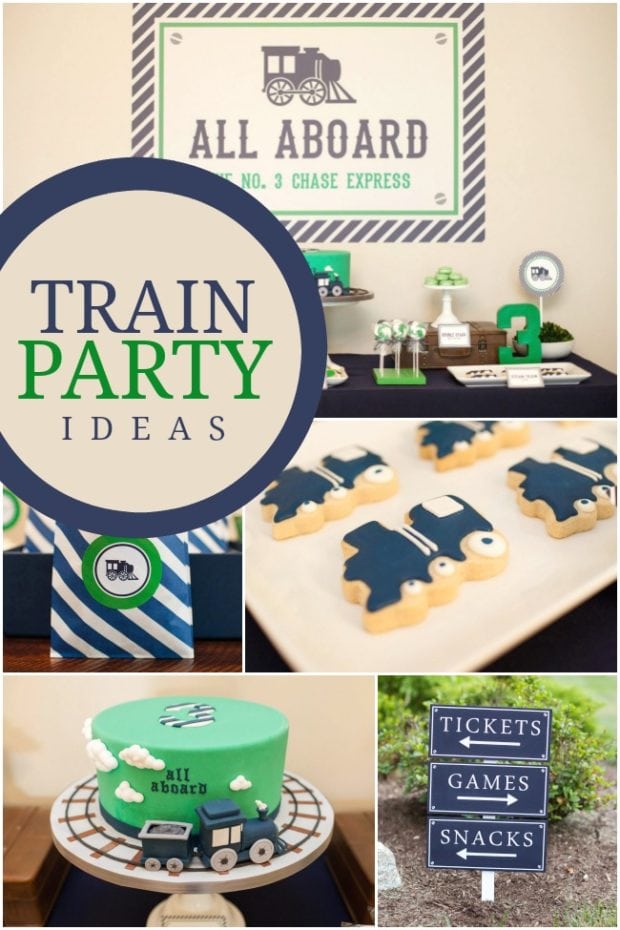