Game on! This boy’s Super Mario birthday party planned and photographed by mom and stylist Chantelle Doll, of Dolled Up Design, is full of the most clever and creative DIY ideas.

Organized for her son, Camden, whose Mario kick was going strong as he prepared to turn five, this party was the perfect theme.

I bet guests couldn’t wait to race on over to party with Camden after receiving such cool Mario invitations. I love that Chantelle had him dress up in his Mario costume and included his photo on the invitation — such a fun personal touch.

There’s nothing like an impending home-based celebration to give you that energy boost needed to complete home renovation projects.

Chantelle must have summoned her own power up boost because prior to party day she created an entire Mario-inspired world out of her unfinished basement.

There was a painted roadway on the floor, which made a perfect track for Mario Kart races using red and green Plasma Cars dressed up with adorable Mario and Luigi monogram logos.

My favorite DIY elements in the room were the Mario bricks hung on the wall. Also crafted from foam core, Chantelle personalized them by adding “Camden is 5” to the fronts.

Little did guests know, but Chantelle had made these as a fun activity and surprise for the party. Underneath each box was a hole covered with tissue paper that guests got to break so surprise loot bag items could fall out.

Chantelle also used her creativity to craft each guest a mushroom bag out of a paper bag and red and white polka dotted paper. Genius!

With a party start time after lunch, Chantelle focused her menu on light snacks. She served pizza pinwheels, pigs in a blanket and several creatively prepared items like a firepower flower veggie and dip platter and piranha plant-inspired fruit skewers.

The true highlight of the refreshment table was the awesome mushroom shaped birthday cake made by using a big cupcake cake pan. Chantelle flattened marshmallows with her rolling pin to make those white polka dots.

This is a stellar party! Chantelle’s life-sized reproductions of the video game elements are fabulous. This party is the kind of stuff that happy kid memories are made of. 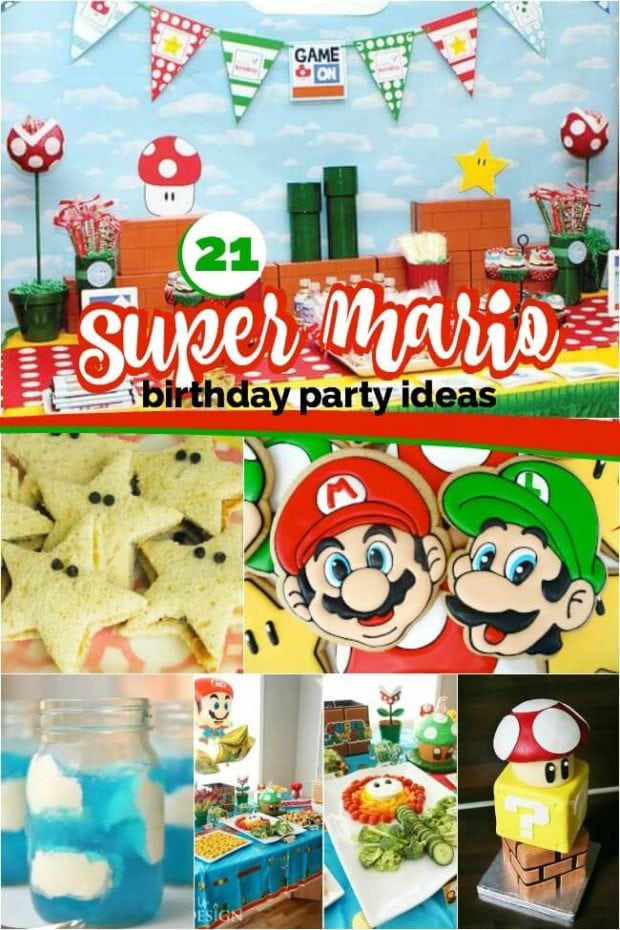