Perfect for summer, fall and the festive season, apple pie bites are so yummy and fun to make that you’ll want to bake them again and again.
Jump to Recipe
5 from 1 vote 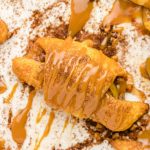 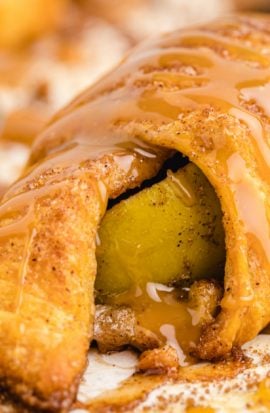 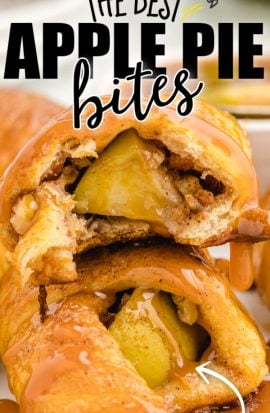 Mini apple pie bites are incredibly moreish sweet treats that are just so easy to make. Gooey and delicious, the baked apple is wrapped in buttery crescent roll pastry and flavored with sugar, cinnamon and crunchy pecans.

This recipe uses shop-bought crescent roll dough which can be used as a shortcut in many different pastry recipes. Take a look at some of our other crescent roll recipes, such as this Mexican-style Taco Ring and these light and flaky Cherry Danishes.

PILLSBURY CRESCENT ROLLS: Other brands of crescent roll pastry will work just as well. Outside of the US, crescent roll dough is known as ‘croissant dough’.

GRANNY SMITH APPLE: These are the preferred apples for apple pies, but for a less sharp taste you could try a different variety such as Golden Delicious, Pink Lady or Jazz.

PECANS: Don’t have pecans? Almonds or walnuts could be used as a substitute.

CARAMEL SAUCE: Caramel sauce makes a great topping for this recipe, as does custard, vanilla ice cream or whipped cream. The choice is yours!

NUTMEG: If you’re making this apple pie bites recipe for Thanksgiving or Christmas, try adding some nutmeg alongside the cinnamon for a traditional holiday flavor.

CINNAMON: You can substitute apple pie spice for the cinnamon if you prefer.

HOW TO MAKE this APPLE PIE BITES WITH CRESCENT ROLLS recipe

STEP TWO: In a small bowl, mix together the brown sugar, white sugar and cinnamon.

STEP THREE: Open the tubes of Crescent Rolls and place each triangle of pastry dough on to the lined baking sheets. For an extra buttery taste, look out for the ‘Butter Flake Crescent Rolls’

STEP FOUR: Melt the butter in the microwave and use a brush to spread half of it onto the dough triangles. Sprinkle half of the sugar and cinnamon mixture on to each triangle. Add the chopped pecans.

PRO TIP: For quick prep of the apples, you could use an apple corer or slicer tool, but you will need to slice each of those slices in half lengthwise again; otherwise, they will be too thick and won’t cook all the way through.

STEP SEVEN: Bake for 12 to 13 minutes. Remove from the oven, top with caramel sauce and serve. The caramel sauce can be drizzled across each apple pie bite or served as a dipping sauce

IN THE FRIDGE: Apple pie bites can be stored in the refrigerator for up to three days in an airtight container. You can enjoy them cold straight out of the fridge or heat them up in the oven if you prefer.

IN THE FREEZER: Apple pie bites freeze very well and can be frozen for up to three months. Wrap each pie in foil or plastic wrap before placing in to the freezer. To defrost, thaw at room temperature before reheating in the oven.

This mini apple pie bites recipe is made easy by using crescent rolls for the crust. We think this is the best way to do it, as it avoids the mess and fuss of making pastry from scratch. This recipe is so easy that a child could do it. We hope that your family will have fun making (and eating) these scrummy apple pie bites together. 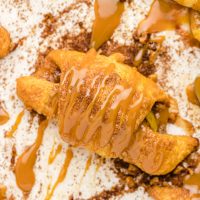