Turning five is awesome, especially when your mom and dad throw you an over-the-top LEGO birthday party to celebrate! Katy from Wild and Wanderful shares how she and her husband built an epic party for their son, starting with a cool pop-art-inspired LEGO invitation. You have to see the edible LEGO-topped cake and how custom designs translated into cool party decorations and favors. Katy shares that her party planning always begins with designing the invitation. She loves the traditional mailing of invitations (so do we!) as an added measure to generate excitement. As you can see, Katy added fun LEGO-inspired details to her invitation. Not only was her use of “Turning 5 is Awesome” a parody of the popular LEGO Movie theme song, but she incorporated other creative details too. Pop-art-inspired bricks, a cool LEGO head, and her son’s name in a LEGO-style font tie the look together. After the invitation was completed, the remaining details of the party began to unfold. We love that Katy incorporates some inexpensive, but effective, DIY projects into her party styling. Katy’s husband, Bennett, painted 3-D papier-mache letters in LEGO colors, spelling out “Louis”. To reinforce the theme, he attached various LEGO toys—and it looks…awesome. Additionally, Katy used her design skills to create items that could be used for decoration and display. There were cool LEGO posters hanging on the wall, a clever photo prop (printed on a blueprint machine and affixed to foam core), and brick coloring pages—allowing guests to make their own designs. LEGO mini-head figures were replicated in vinyl and added to Take-and-Toss sippy cups for little guests. Adults were offered coordinating Mason jar versions. We bet guests loved being able to take their cups home after the party was over! In addition to coloring LEGO designs and posing with the photo prop, partygoers had a terrific time jumping and playing in Louis’ new bounce house. Because dressing to coordinate with a party theme is also awesome, Katy created LEGO-themed shirts for her family. We especially love Louis’ shirt made to outfit him like a mini figure. Isn’t the peg-shaped hood just perfect? Katy’s mom was the master baker responsible for the shaped cake, complete with edible mini figures and bricks. What a treat to gobble up such a cute cake. LEGO-shaped gift boxes were another inspiring DIY project. Bennett spray-painted boxes and added small foam circle pegs on top. These decorations had a dual purpose: décor for the party tables and favor boxes at the party’s conclusion. They were filled with handmade LEGO bracelets (way cool) custom tattoos (love) and playdough. Katy and Bennett also made LEGO head mini figure masks for party guests to wear during the party. We are pretty sure all the guests would agree that everything about this LEGO birthday party is awesome! What a fun celebration for an adorable little girl or boy. Katy is willing to share her download links to the files she used to create many of the elements for this celebration. You can find them here.

Get loads of inspiration from these birthday party ideas: 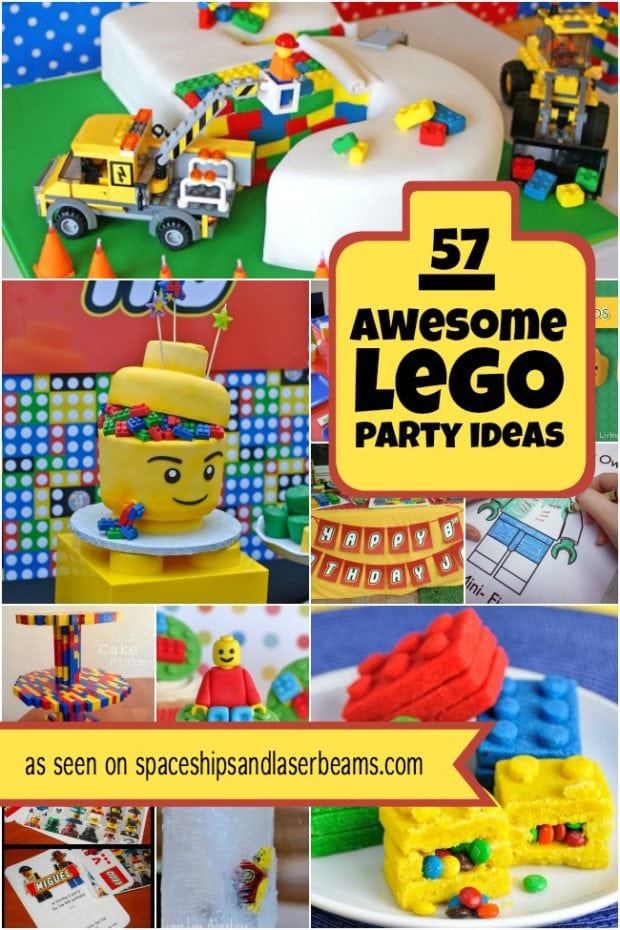