Arrgh! Ye dare not pass up the swashbuckling fun details of this boy’s pirate themed birthday party by Candice Birmingham of Pocket Full of Parties.

With a scurvy captain at the helm and lots of vintage prop decorations, I’m thinking a “pirate’s life” is looking pretty amazing. But just wait until you see the double chocolate cupcakes, parrot topped birthday cake and themed party games. Yo ho—is this pirate’s life for you? Candice set the tone for her party by sending out awesome DIY message-in-a-bottle style invitations.

Invitations were printed on aged parchment. Candace then carefully burned the edges with a lighter.

They were rolled up like scrolls and tied with red jute prior to being tucked inside the bottle and capped with cork—awesome! Inspired by a ship’s wheel she had acquired for a previous party, Candice set up an amazing cake and dessert table.

Weathered fishing nets and a variety of treasure chests set the foundation the sweets and treats. Bottles were filled sand, shells, jewels and gold coins. You could almost play a pirate version of “I Spy” while trying to notice all of the mood-setting props and details. Love that jaunty skeleton outfitted in his pirate patch and hat.

Notice the story he tells with the empty golden goblet and a full bowl of golden coins in his lap—party styling at its best. There were double chocolate cupcakes outfitted in feather toppers—love the way they look. Peanut butter cookies were dipped in yellow candy melts and covered in edible gold dust to look like doubloons. Cream puffs were embellished with pirate sails—such a fun addition. Polly made her debut perched on top of the turtle cake. Guests washed down the treasured treats with bottles of Ginger Beer. Note the authentic looking labels.

Aren’t printables such a great way to bring in themed elements? Swords, pirate hooks and hats filled a treasure chest, and little scallywags were invited to pull out their favorite pirate props so they could dress the part. With such a terrific array of themed props and treats, you know the pirates at this party were stoked for adventure. What a great celebration!

Check out these party supplies for your pirate birthday party: 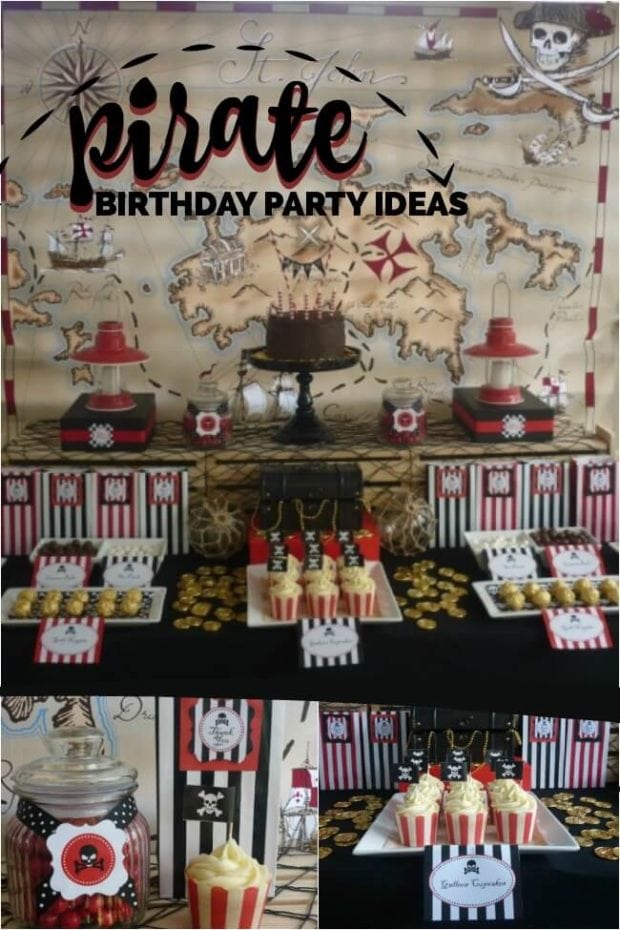