Ahoy birthday mateys! Arr you ready to see the details of an adorable pirate themed birthday party, complete with a treasure trove of dessert table ideas?

This awesome pirate party was planned and styled by Sarah of The Crafting Mama blog in celebration of her son’s 5th birthday party.

As the photos evidence, there are some great party planning gems to be found by anyone wanting to throw a pirate party. 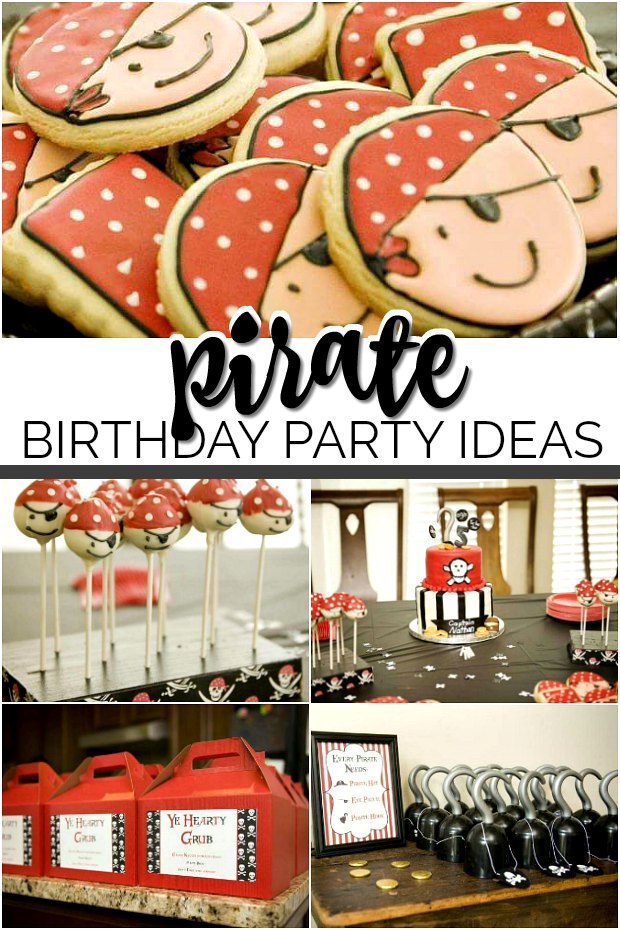 What better way to invite friends to a pirate party than via a message in a bottle? Invitations were printed on parchment paper, and the edges were carefully burned to give that weathered look.

Each invitation was then tied up with hemp and carefully tucked inside a bottle filled with sand, seashells, and a pirate ring.

What a cool way to set the stage for a pirate themed birthday “parrty”!

On party day, Sarah decked out her home with photos of her birthday boy in pirate garb, red and black balloons, and plenty of skulls and crossbones.

(Isn’t the mantle centerpiece awesome? I love that the font used for the “5” looks like it came straight off of a treasure map!)

Most of the décor items are DIYs by Sarah. You’ll catch glimpses of clever party printables used to mark activity stations, and as tags for party favors.

Sarah also created her own birthday banner out of burlap, ribbon, cardstock, and tulle.

The littlest details can make a party theme.

For Sarah, these cute pirate gumball machines were one of those details she had to include.

She found these awesome party favors online and designed her own printable favor tag to go with them. “Thank you for coming to my pARRty!” is the perfect sentiment.

Sarah used her Silhouette machine to cut out the tags—a great time saver!

I can just imagine how anxious the party guests were to “get [their] loot” at the end of the party.

Another major emphasis for Sarah was the bounteous pirate dessert table.

Sarah made most of the pirate goodies, but the awesome cake centerpiece was a purchase from a local-to-her recommendation — Cake it Easy Bakery.

Two tiers of awesomeness, it featured a pirate hook and #5 toppers as well as popular pirate sayings like “argh” and “yo-ho-ho”.

The front of the cake showcased a skull and crossbones while the base of the cake was decorated with a small treasure chest and gold coins.

To add to the incredible cake, little cake bites (or cake pops) covered in frosting were “dressed up” as pirates with red and white polka-dotted skull caps and edible frosting eye patches.

These were created on sucker sticks for easy displaying.

Two sets of these were displayed on each side of the cake and looked adorably delicious.

Rumor has it that these cookies were mouthwateringly good. We believe it! They look amazing.

The pirate cookies and pirate cake pops look almost identical, except in their respective dessert forms (cookies vs cake pops).

We love the repetition of a cute pirate design!

For an easy dessert idea, check out Sarah’s dipped marshmallows.

She simply dipped marshmallows in red candy melts and topped each marshmallow off with black sprinkles.

Displayed in black and white skull and crossbones cupcake wrappers, they were a quick and easy dessert table addition.

Another plus? Kids love marshmallows, especially when they are dipped in candy and sprinkles.

Dressing up like pirates is half the fun of a pirate birthday party adventure!

Guests at this party went home with some new pirate garb thanks to the birthday boy and his mom’s creative planning.

As the birthday pirate crew entered the house for the celebration, they were invited to make an important pirate pit stop for some necessities. After all, to be a true pirate, one needs a pirate hat, a pirate eye patch, and a pirate hook.

The pirate goods were appropriately displayed on a peg-legged wood table, amidst a scattering of gold coins.

A digitally designed sign in a tabletop frame stood as a reminder of what every pirate needed to get and included both pictures and words for easy identification.

Using her Silhouette machine, Sarah created the perfect vinyl decal to embellish the wall above the pirate garb. It read: “Pirates only:  All others will walk the plank!”

The vinyl skull and crossbones drove the look home.

If you are looking for ways to make your budget stretch, having a pirate dress-up station such as this is perfect. It serves as temporary décor until the pirates claim it to wear, functions as a party activity, and also acts as a great take-home party favor.

Pirates are known for working up hearty appetites, but not everyone likes the hassle of dishing up their own grub.

She designed her own gable box label stickers which she affixed to each box. The labels read: “Ye Hearty Grub”.

The labels included a list of the contents of each meal kit. The menu included golden nuggets (chicken nuggets) and ruby sauce (ketchup), popcorn called “Pirate Booty”, and a ship o’ fruit with a sword (waffle bowls filled with fruit and a sword pick).

The kids loved having their own boxed dinner.

A pirate party isn’t a party without some games and activities.

Sarah planned a plethora of pirate party activities to keep guests engaged. Not only did she hide clues all over her yard for a treasure hunt and hide treasure in the family sandbox for a treasure dig, she also had a Captain Hook inspired cannon ball toss using black water balloons.

Inside her home, a table covered in disposable tablecloths was transformed into an activity station.

The placemat included an area which challenged guests to design their own pirate treasure map, and also featured a maze they had to complete to reach a treasure chest.

For a little bit of pirate humor, Sarah included her best pirate joke: “What is a pirate’s favor letter?” The answer—“Arrrrr!” (We know you’re laughing!)

Party pirates each had a treasure chest to decorate at their place setting too.

Markers, crayons, and foam stickers were on hand for embellishing each treasure chest.

Another fun station at this scurvy pirate party was “The Jolly Roger Tattoo Parlor”. To be a legit pirate, you need some sort of tattoo, right?

A small treasure box housed a variety of temporary tattoos from which the party guests could choose their own tattoo style.

Sarah made the station sign and framed it as part of the display.

Don’t you wish you were invited to this incredibly fun pirate birthday party? Here’s to 5-year-old pirate adventures and many more birthdays to come for the birthday boy!

Plan a pirate birthday party with these party supplies:

Be sure to check out some more pirate birthday party gems:

Plus, don’t miss out on this Yo Ho! Ho! A Boy’s Pirate Party…