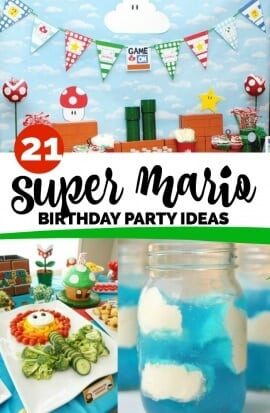 Get your party game on with these Super Mario birthday party ideas, supplies, decorations, food and cake ideas

From a Yoshi egg smash party game, to toadstool appetizers, to fire flower cookies, and Super Mario Brothers cake pops, there are so many fun party supplies inspired by the game. If you want to make your own Super Mario Brothers mushroom cake, check out this tutorial! This small cake is made from a half sphere-shaped cake and a portion of another cake round, plus buttercream and fondant. From Dolled Up Design, as seen on Spaceships and Laser Beams

You’ll be ready to take your Super Mario Brothers party food to the next level after viewing this awesome party. A mushroom cake, meringue cloud cookies, flower power veggie and dip platter, piranha plant inspired fruit skewers, and even Mario hats made from Babybel cheese are just a few of the creative ideas. From Mud Pie Parties, as seen on Spaceships and Laser Beams

Cake pops are always a dessert table favorite at birthday parties. Mario, Luigi and all sorts of characters from the Super Mario Brothers game can join your party in cake pop form. From Cynthia L, as seen on Catch My Party Have a little fun with your Super Mario Brothers themed party food by bringing in some of the game elements. You can create these toadstool appetizers using tomatoes, mozzarella and feta cheese. Trying to come up with a fun idea for your Super Mario Brothers dessert table backdrop? You can create a scene straight out of the video game using a variety of butcher paper, cardstock and craft supplies. These star power sandwiches are sure to be a hit at a Super Mario Brothers party. These Nutella and peanut butter sandwiches were assembled and then cut with a star-shaped cookie cutter. The eyes are mini chocolate chips. If you’re looking for a fun idea for Super Mario Brothers cupcakes, try your hand at creating characters from fondant. Mario, Luigi, mushroom, flower power, and so on, would all make awesome fondant toppers. Make up a batch of your favorite shaped sugar cookie dough. These Super Mario Brothers cookies are sure to give you plenty of practice making royal icing and perfecting your outlining and flooding techniques. Bring some game to your Super Mario Brothers dessert table with an awesome cake. This cake features 3 unique layers all instantly recognizable from the video game—a brick, a question mark, and a mushroom. Take cues from this Super Mario Brothers birthday party to help guests feel like they are in the game. Pass out all-access gamer passes. Serve up a Mario Brothers inspired energy boost station where guests can power up on Super Mario themed treats, and entertain them with a video game arcade on wheels. Can you believe that moving boxes, paint and permanent markers are all that you need to make these amazing Super Mario Brothers brick and question mark box decorations? Stack them up and use them as an entrance arch for your Super Mario Brothers party or as an activity fort for playing.

From One Little Project

If you’ve ever played the Super Mario Brothers video game, you are familiar with the blue sky featuring distinct white clouds. Now you can serve up party guests blue sky Jell-O with fluffy whip cream clouds. This may be the easiest party recipe ever. From Nestling Designs, as seen on Kandy Kreations

Add a little action to your Super Mario Brothers party with this DIY stomp the Goombas game. The Goombas are made from balloons, paper plates and printable paper faces. 20. Pin the Mustache on Mario

From No Reimer Reason

Mario’s mustache is almost as famous as he is. This pin the mustache on Mario makes for a fun twist on a classic party game. You can hand draw your Mario and cut mustaches out of cardstock, or enlarge a readymade photo of Mario to use for the game. Whip up your own fire power for your next Super Mario Brothers party. These fire flower cookies are made using a cookie cutter and dyed cookie dough.

Throw a Mario-inspired birthday party with these party supplies:

Plus, don’t miss Game On! A Boy’s Super Mario Party…