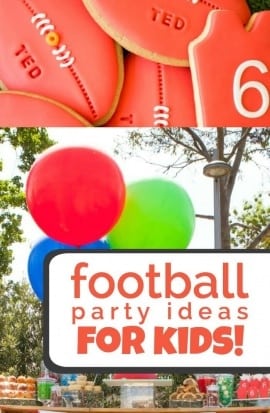 For a young birthday boy like Ted, whose dad is a football coach and former pro football player, having a football birthday party is a natural.

Mom Kylie (from the blog Love Little Big) collaborated with Lisa, Burnt Butter Cakes, to plan this awesome themed party where the birthday cake was a football, the dessert table was a concession stand and the word of the day was fun! My Little Tribe Photography caught all the action. Sunshine and fresh air are “decorative” elements that can’t be beat. This outdoor party had all that and more.

Red, blue and green were echoed in over-sized balloons, candies and props throughout the party. Just like the authentic football tradition, a custom run-thru football banner marked the joyous party beginning for the birthday boy and his guests.

Coach Dad (Josh Fraser) ran a training session and then it was game on! The apothecary jars filled with colorful candies and the array of classic Aussie football foods were served after a friendly footy game. After the game, hungry players gathered ‘round the guest table. A green turf runner was just the spot to enjoy the football-shaped chocolate birthday cake. Birthday guy Ted especially liked the personalized trading cards that included stats and images of all the party guests. What kid wouldn’t like seeing him/herself as a star player worthy of a trading card?

What a cool idea! They made great party favors along with bags of candy.

And who knows? Maybe someday those trading cards will be great collector items.

In any event, they will certainly serve as tangible proof of a winning birthday party! Plan the ultimate football birthday with these party supplies:

Plus, don’t miss 20 Football Party Ideas You Will Love…