When a boy turns 12, what better way to celebrate than with a 12th man football party?

That’s exactly what Christina Goff of 4 Kids Cakes did for her son Braedon, who is a huge Seahawks Football Fan.

From football cookies and a Seahawks cake to traditional football snacks and creative football decorations, Christina thought of everything to give her son the perfect football-themed party for a twelfth birthday.

Around Seattle, football fans are called “the twelfth man” to refer to the support they give to the eleven team members playing on the field.

Christina worked the 12 into her decorations, from the banner she hung over the dessert table, to the cookies she served, to the wreath she found for the living room.

What a perfect way to celebrate a tween’s birthday while also providing lots of memorabilia he can keep.

Christina made the impressive Seattle Seahawks showpiece cake herself.

She set the cake on a football tray underneath a huge “12” banner and suspended blue, white and green paper chains around the banner backdrop; a turf table runner completed the look. Perfect!

Of course, any football party needs plenty of snacks.

Christina stamped footballs on paper cups to hold veggies and dip, and included pizza rolls, popcorn, chips, and the staple at any Seahawks game — Skittles candies.

Seahawks player Marshawn Lynch eats Skittles before every game, so now they are hard to find in Seattle during Super Bowl season; but Christina persevered and had a great candy selection for her son’s friends.

The popcorn went into adorable football boxes from Banner Events.

Christina knows well what tweens like to eat too: cake pops and chocolate covered Oreos!

Each cake pop had a blue-and-white striped skewer with a cute “12th man” label on it.

She created most of the treats herself, including fondant-topped cupcakes with fun sayings from some of Braedon’s favorite football players.

Marshmallow pops decorated as footballs on skewers added to the football look.

Christina says when it comes to gorgeous cookies, she goes to Sweet Themes Bakery.

From the pictures, its easy to see why!

Christina went beyond the usual football decorations to set the stage for Braedon’s party.

She had Shabby Sisters Designs make a distressed wooden blue-and-green sign saying “Seahawks’ the 12th Man” to display in the living room. (I’m sure it still has a place of honor somewhere in the house!)

A classy, blue-and-green wreath with a number “12” from Shontay ties the whole football collection together. There were also plenty of football banners and memorabilia to display as well.

Cool blue and green cups from a local Dollar Store were made party ready with vinyl cut outs and flags from Party On! Designs; that’s how Christina turned the cups into Seahawks cups that each tween could take home!

Christina hired Stephanie Vogel to capture the special day for Braedon. She also got Braedon a football T-shirt to wear for his party. His sister wore her green and blue Seahawks jersey (and I’m sure many guests were happy to show up in their jerseys too!).

Whether for a birthday, a tailgate party or football season yahoo, these concepts are perfect for any football party.

Thanks for all the great ideas, Christina.

Get all your football themed boy birthday party supplies here:

Plus, don’t miss out on 20 Football Party Ideas You Will Love… 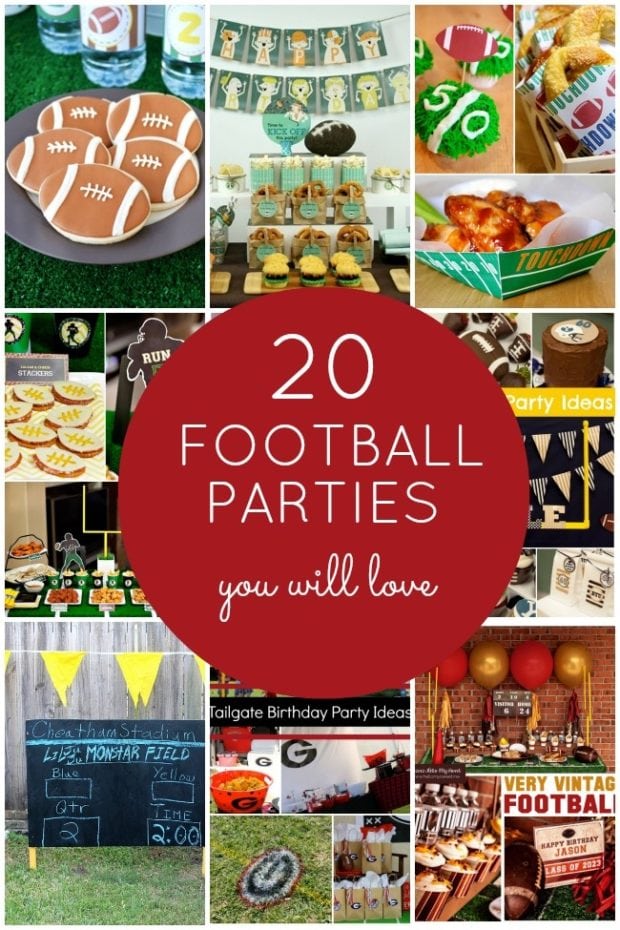