It's so easy to make this authentic Dole Whip recipe from Disney—it's the ultimate at-home, vacation inspired treat!
Jump to Recipe
5 from 1 vote 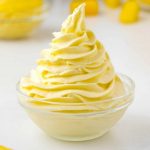 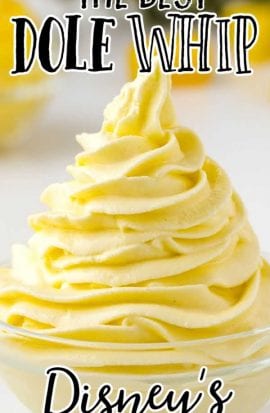 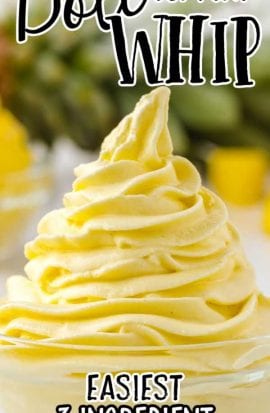 It doesn’t get more magical than the bright, creamy taste of an iconic Dole Whip, and this is the official pineapple recipe, as released by Disney Parks itself. Even if you aren’t visiting the Magic Kingdom anytime soon, you can bring some of the wonder of Disneyland into your own home.

The perfect frozen treat to combat the heat and crowds at the parks, Dole Whip is one of those famous snacks that people have often tried to replicate at home. Thankfully, now we can the right way, with the authentic recipe! Plus, this version is a lot quicker than a full vacation—it’s made with only 3 ingredients and ready in 5 minutes.

Rum: For a fun, adults-only version of this drink add 1.5 oz of rum to your blender as you make your Dole Whip.

How to Make this Dole Whip recipe

STEP ONE: Add all of the ingredients to your blender.

STEP TWO: Blend until smooth. The Dole Whip should have a thick and creamy consistency.

STEP THREE: Using an icing piping bag or Ziploc bag with a corner trimmed off, pipe your Dole Whip in a swirl into a cup.

PRO TIP: If using a piping bag to swirl your Dole Whip, use a large nozzle as the mixture will be thick. You can also add your mixture to a large Ziploc bag, trim the corner and use the bag to pipe and swirl it.

IN THE FREEZER: Dole Whip is a frozen dessert similar to frozen yogurt, which makes it best to store in your freezer. Keep it in an airtight container or plastic bag. Keep in mind that this recipe makes a single serving, so there’s not likely to be much leftover!

It’s recommended to make your homemade Dole Whip just before you’re planning to eat it (instead of ahead of time) to create the same beloved texture found at Disney World.

Disney’s beloved Dole Whip is a summer treat that’s creamy, refreshing, and made with only ice cream, pineapple juice, and frozen pineapple. It’s a simple and fun way to bring some of the magic of Disney into your own home. 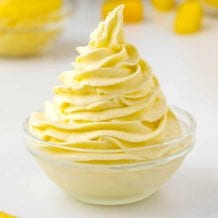 To make enough to share, simply double or triple the ingredients listed into a full size blender.