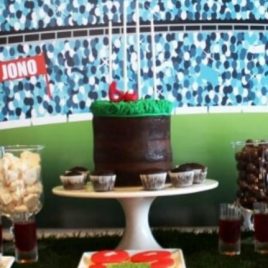 This birthday football super fan was given a special treat for his sixth birthday party! Jonathan goes to almost every Collingwood game, part of the AFL (Australian Football League), with his dad. So it was no question what his birthday party theme would be: Aussie Rules Football. In order to make the theme neutral instead of making it team-specific, Anne of UR Invited chose non-team-specific colors. She focused on green, blue, and brown with pops of red. All the guests enjoyed that every team won! She provided printables including invitations, backdrops, and favor bags. We love the custom backdrop, it looks like thousands of screaming fans are cheering on the birthday girl or boy. We think the scoreboard sign and lights are perfect touches as well. The food table has green grass instead of a tablecloth. Such a clever touch! That simple layout really brings the theme home. All the food is laid out in simple dishes including clear glasses and white trays. Guests enjoyed a variety of food including traditional Australian treats like Lamingtons, which are a meat pie. There were also cookies, candy, and whoopie pies. The cake is darling! It was created by Orange Blossom Cakes and Events. The cake is chocolate, which looks like dirt. The icing is green and shaped like grass. The toppers include the birthday boy’s number six, a football, and goalposts. The cake is surrounded by chocolate cupcakes as well for the guests to enjoy. Thank you gifts to the guests included football-shaped cookies in custom packaging. Plus, don’t miss Football Party Food Ideas You Will Love