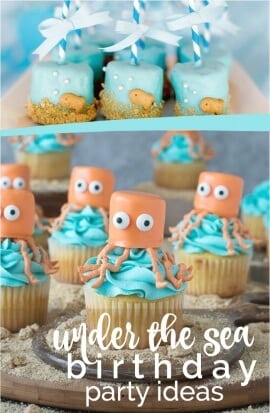 Add these adorable DIY paper lantern fish to any ocean inspired or under-the-sea themed party! You’ll just need round paper lanterns, assorted tissue paper, cardstock, string and some basic craft tools like scissors, tape and glue. You’ll have your own cute school of fish in no time. 2. Under the Sea Party Ideas

From Stunning Parties, as seen on Spaceships and Laser Beams

Whether you’re looking for DIY decoration ideas for planning your own under the sea party or ocean inspired dessert ideas, this party is overflowing with inspiration. You’ll find everything from shark fin cupcakes to seahorse lollipops and sea creature décor suspended from the ceiling. From Sally M, as seen on Catch My Party

Serve up a batch of sand dollar cookies on a bed of brown sugar “sand”. Lightly press a small star shaped cookie cutter into the center of freshly baked round sugar cookies and freehand some details with a knife. From Sally M, as seen on Catch My Party

Kids may not enjoy eating real seaweed at an under the sea party, but these green sugared Sour Punch Straws makes a fun alternative. Display them in a clear glass vase with a creative sea inspired tag to create the clever connection. From Sweet Things by Rianne

Creating these sea turtle cupcakes doesn’t require a whole lot of time or talent. Frost a batch of your favorite cupcakes and use gumdrops, peach rings, spearmint slices and mini chocolate chips to create the turtle. From The Party Starters Events, as seen on Kara’s Party Ideas

Kids will go crazy over these fish marshmallow pops. If marshmallows weren’t yummy enough already, coating them in an under the sea inspired layer of blue candy melts and dipping the bottom edge in brown sugar “sand” will definitely kick things up a notch. And to make things even more fun, adding a little goldfish cracker while the candy coating is still wet makes the pops even cuter. Up to your eyeballs in under the sea party prep? These little fishy cupcakes are easy enough for kids to help prep. In addition to cupcakes, frosting, and food coloring, you just need some colored chocolate candies (M&Ms are great) and candy eyes.

9. Under the Sea Fishing Pond Game

From Sherry W, as seen on Catch My Party

A classic party game, DIYing your own under the sea fishing pond game is easy. Cover a trifold board with blue wrapping paper and add sea inspired paper pieced cutouts to create the feel of the ocean. Add string and a paper clip or clothespin to the end of a dowel rod for kid-friendly fishing. From CupKate’s Event Design, as seen on Spaceships and Laser Beams

Suckers, chenille stems, fabric scraps or tissue paper and googly eyes are all you need to craft up these adorable octopus lollipops. Insert them into a wrapped box or foam square for an easy under the sea themed treat. From The Decorated Cookie, as seen on Spaceships and Laser Beams

All you’ll need to create these sea creature candy pops is a variety of candy melts, disposable decorating bags, parchment or wax paper, sucker sticks and candy eyes! Some simple tips later and you’ll have a whole slew of under the sea candy pops ready to party. From CupKate’s Event Design, as seen on Spaceships and Laser Beams 13. Under the Sea Search and Find Game

Colored rice and laminated sea life printables make this under the sea search and find game come to life! This is a fun twist to a traditional “I Spy” game. 14. Under the Sea Party Favor Buckets

From Life on the Mom List, as seen on Love the Day

Thank your party guests for “swimming by” with these under the sea party favor buckets. You can fill them with anything sea or ocean inspired—swim towel and goggles or fish themed toys and treats. Put together adorable splish splash party tubes using basic candy tubes! You can embellish them with under the sea inspired embellishments like cutouts, stickers and ribbon and fill them with gummy fish. 16. Under the Sea Snow Globe Aquariums

From Delia Creates, as seen on Chickabug

Need a quick and frugal under the sea party craft and favor idea? These under the sea snow globe aquariums upcycle baby food jars and use a few easy-to-find materials—glitter, spray paint, glycerin, food coloring and small toy sea animals. Who knew that an ordinary watermelon could be carved into a ferocious under the sea party predator? This tutorial for carving your own shark watermelon fruit bowl will walk you through all of the steps. You’ll definitely make a splash at your child’s under the sea party with these awesome tropical fish jelly cups. They are so easy, you probably have most of the ingredients at home—pudding, Jell-O and gummy candy fish. 19. Under the Sea Graham Cracker

Because frosting and graham crackers are oh so good, you’ll definitely want to prep a bunch of these cute under the sea graham crackers for your party! Plus, it doesn’t get any easier than whipping up a batch of blue tinted buttercream (or buying some), adding some brown sugar sand and plopping on some goldfish crackers and candy sea life. Octopus cupcakes are perfect for an under the sea party! Whether you make or buy your cupcakes, creating that cute little edible octopus topper may just be easier than you think! Would you believe the little guy is just a marshmallow dipped in candy melts with candy eyes added?

21. Under the Sea Photo Booth Backdrop

Foam balls, spray paint, tissue paper and fishing line are the main materials you’ll need to create this incredible under the sea photo booth backdrop. We think it would look pretty magical for a dessert table backdrop too! Be prepared to have your mind blown when you discover how easy it is to take that standard Oreo ball recipe you’ve come to know and love and change the shape! A simple jelly fish cookie cutter paired with the same basic recipe results in these adorable under the sea party worthy treats! 23. Under the Sea Birthday Party

Budget friendly doesn’t mean boring when it comes to decorating an under the sea birthday party. Less than $10 spent on inexpensive things like crepe paper, butcher paper, cardstock and plastic table cloths can still result in an amazing DIY’d party.

Planing an under the sea themed party? Check out these sources gathered by they Spaceships and Laser Beams Crew for great inspiration.

Plus, don’t miss Under the Sea Boy Baby Shower…