This party theme choice was a blast: The Mad Scientist! – a mad science themed birthday. Christian’s ninth birthday celebration was created by his mom, Char. Her awesome ideas carried out the mad scientist theme from invitations to take-home favors to party games. Notice the dessert table—the birthday boy looks pretty happy about it all!

I love how Char used party supplies to transform her existing house features into a giant indoor/outdoor laboratory for celebrating.

The dessert table is trimmed with party color balloons and more sweet temptations than a body should be able to ingest but the party kids were glad to experiment with how much they could eat.

I think the chalkboard behind the dessert buffet adds a nice nod to old-school chemistry class.

Throughout the display areas you’ll notice microscopes and a telescope, which all magnify the party theme, plus there are numerous posters of scientific paraphernalia.

A dark and gloomy lab wouldn’t do for a birthday celebration. This room positively glowed with sunny yellows and acid greens which played off the bright, white walls.

Young guests were outfitted with everything a mad scientist might need: white lab coats and green, polka-dotted bowties, an identification badge, sterile exam gloves, safety goggles and a magnifying glass.

Numerous “stations” were set up around the room for food and fun activities. Char effectively used an existing ledge to display a centerpiece microscope, plus beakers and test tubes that were filled with colored water.

Behind that, green and yellow “molecules” bubbled across the wall, punctuated with a mad scientist picture (starring Christian) and a laboratory fun sign.

The table setting beneath this display holds all manner of items to be used in the party experiments. Shelves on either side of the table contain additional experiment supplies.

Char had several actual experiments planned. They not only gave party guests something interesting to do, it was a fun, learning environment, too.

In addition, there was a beverage “experiment station” which included giant syringes that a mad scientist might want to drink from.

A cupcake “experiment” allowed each guest to decorate his own masterpiece. Can you imagine the excitement all these decorations and activities generated?! Looks like this mad scientist birthday experiment was a smashing success. 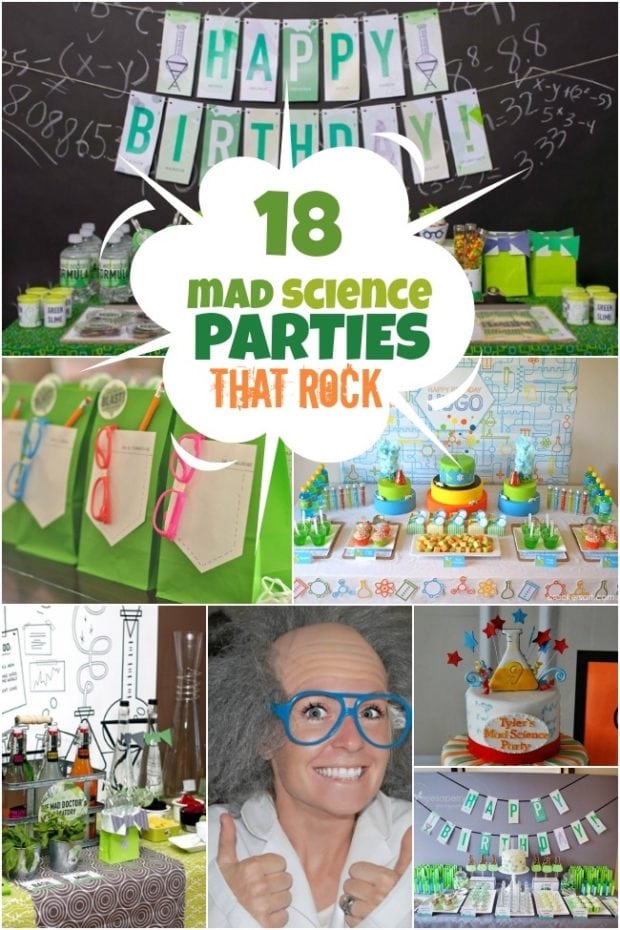