Staci of Lizard and Ladybug put a fun pirate and polka dot twist on this adventurous theme as she celebrated both a girl and boy’s birthday party for her son and daughter.

Her decoration ideas are creative and budget friendly.

To set the scene for this pirate party, Staci hung a giant Jolly Roger flag at the entrance along with darling pirate themed signs crafted by The Purple Pug.

I am smitten with the way Staci displayed her refreshments! First up: a DIY treasure map table cover using kraft paper and paint.

Black dots mark the path to the yummy food.

Each item was also marked with a food label, making the tempting choices easily identifiable.

Cupcakes were crowned with cute toppers and displayed in a three-tiered stand.

And if there is a pirate ship, then walking the plank is always a possibility. Staci used a blue tarp to represent water. Kids walked polka dotted wood planks.

Another way guests kept busy was with bubble pirate “swords”. Staci thought of everything, including a refill station where guests could add more bubble solution. Not only could guests enjoy their bubble swords at the party, they also served as a great take-home party favor.

At the request of her children, affectionately called “Lizard” and “Ladybug”, a filled treasure chest piñata was another fun party activity.

Guests took a whack or two until the loot scattered on the ground.

As pirates disembarked from this exciting seafaring party adventure, they visited one last station.

Fish netting held treasure maps which thanked them for participating in the pirate and polka dots adventure.

What a swashbuckling’ good time!

Plan your pirate birthday party with these pirate party supplies:

Be sure to check out more boy’s pirate party inspiration:

Plus, you don’t want to miss A Swashbuckling Pirate Birthday Party… 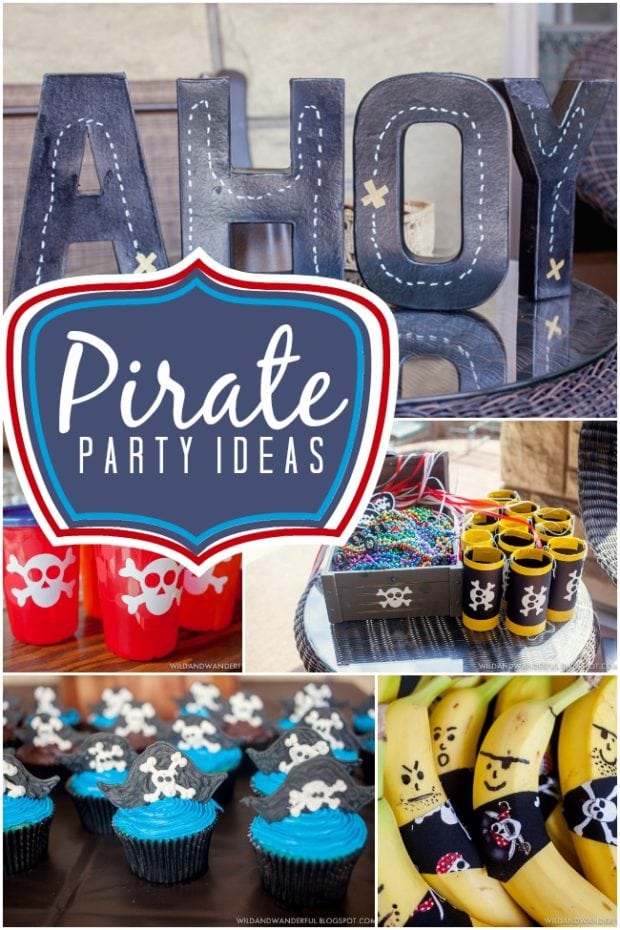