I’d say they hit the mark!

The party was designed around a fitting color palette—Hulk green and purple.

Come see how they tackled a Hulk inspired birthday cake, birthday party decorations, favor boxes and party supplies—all fitting of the strongest of the Avengers.

The party venue had a red, brick wall—a perfect backdrop for a Hulk-themed party table.

Feather used the red bricks as the primary focus for the dessert table. She designed a Hulk inspired birthday banner which featured a grimacing Hulk and her son’s name—Ethan—spelled out in purple lettering on a field of Hulk green.

I love how she trimmed the bottom of the banner to look jagged, like Hulk’s ripped shirt! She suspended the name banner against the red brick wall and over the serving area.

It really packed a punch and gave a pop of color against the industrial looking wall.

With the backdrop styled, Feather composed the dessert table to set right in front of the wall. The table was covered in a green tablecloth, reminiscent of the Hulk’s green skin tone.

A piece of raw denim fabric was draped and layered on top and gave the feel of the Hulk’s ripped jeans.

The birthday name banner was one example of the party decorations she created, and these custom favor boxes are another example.

You will see her designs in action throughout the party decorations, party activities, party favors, food and beverages.

Piñatas are a great party activity for just about any theme, but they make a particularly clever choice for a Hulk piñata smash.

If you’re looking for a budget-friendly piñata option, consider DIYing your own.

Feather made this Hulk-inspired piñata herself! She took an 11″ x 14″ box, tape, green tissue paper, a printed Hulk face from her personally designed collection, and glue.

She used these materials to devise a Hulk piñata which the boys thoroughly enjoyed bashing.

Instead of using a stick or bat to bash and smash the piñata, Feather provided guests with a pair of toy Hulk gloves.

The party attendees savored the opportunity of getting into character by wearing the gloves and boxing the piñata! What a fun way to get out some energy.

The dessert table not only had a birthday cake featuring the Hulk, but also a variety of themed sugar cookies.

There were several interpretations of the superhero and stray gamma rays on a various cookies.

The dessert offerings also include green and white striped were candy sticks and bags of smash corn. Notice the green snack bags with custom labels that read “Hulk Smash”.

Superheroes get thirsty while they are trying to save the day. Feather was prepared.

She had a purple beverage bucket filled with thirst-quenching bottles of water. The water bottles were decked out for the party theme, and featured designer water bottle wraps covered in Hulk’s glowering image.

A fun surprise for a birthday boy is to have a custom, theme-coordinating shirt for him to wear on party day.

Feather thought of everything.

Ethan sported his own custom made Hulk T- shirt at his party—an embroidered replica of the Hulk his mom had designed for the party decorations.

Fortunately for party guests, the grimacing character on his shirt seemed to make him smile instead of roar like the Hulk.

After celebrating near limitless human strength and flexing their incredible superhero muscles, party guests were able to take home filled favor boxes and their own incredible Hulk masks for future involuntary transformations.

And the sentiment on the party favor boxes is just perfect—“Thank you for coming to my smashing party. Your friend Ethan.”

Providing masks and/or dress up supplies is a great party activity, and is especially awesome when those supplies can also function as part of the party favor.

If you want to keep the action going, once the kids transform into character with their Hulk masks, you could set up an easy DIY photo booth to capture the special day.

Kids love imaginative play and getting to act like their favorite superhero characters.

Plan an Incredible Hulk superhero party with these party supplies:

Plus, check out 33 of the Best Avengers Birthday Party Ideas… 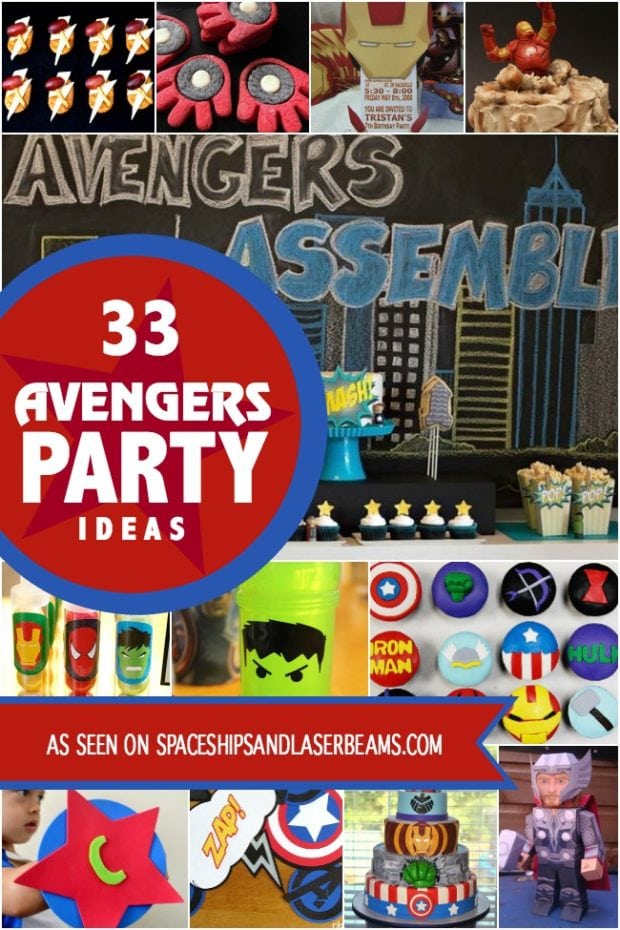