Shiver me timbers! This X marks the spot pirate themed boy’s birthday party, by Andrea Malpass of Where the Green Grass Grows Designs, is full of swash bucklin’ fun ideas any pirate would sail the Seven Seas to reach.

Using the new “Ahoy Collection” from The Land of Nod, the stage was set for a fabulous seafaring pirate party adventure. Treasure map invitations and loads of pirate printable decorations set a thrilling atmosphere.

Buccaneer bounty was a plenty on the dessert table with cupcakes, treats and loads of pirate treasure favors. Don’t miss one single detail or risk walking the plank!

Dripping with jewels, gold coins, diamonds, hooks, eye patches, compasses, weapons and more, for little pirates to pillage and plunder, this table was definitely the spot to be.

I love how Andrea used the big red wooden X on her backdrop to reinforce this idea.

Adorable pirate loot bags sat at the ready to fill with the yummiest of treats befitting of even the most scurvy of pirates.

With clever food labels like “Cannon Balls” (Whoppers) and “Pirate Booty”, surely nobody had to face Davy Jones’ Locker on an empty stomach.

Cupcakes were creatively displayed on a pirate ship cupcake stand with gold coin cookies close by. A sea-worthy banner added a perfect complement to the rustic backdrop.

Root beer and sea water were on board to help hydrate the thirsty pirate crew.

Little details, like the red and white striped fabric reminiscent of pirate clothing, added a fun accent to the root beer bottles.

Speaking of pirate clothing, the costume hanging out to dry after a poor pirate walked the plank added such a fun touch to the decorations.

You will love Andrea’s other pirate party and you can also check out her work on her website: Where the Green Grass Grows Designs.

Plus, don’t miss out on this Swashbuckling Fun Boy’s Pirate Birthday Party… 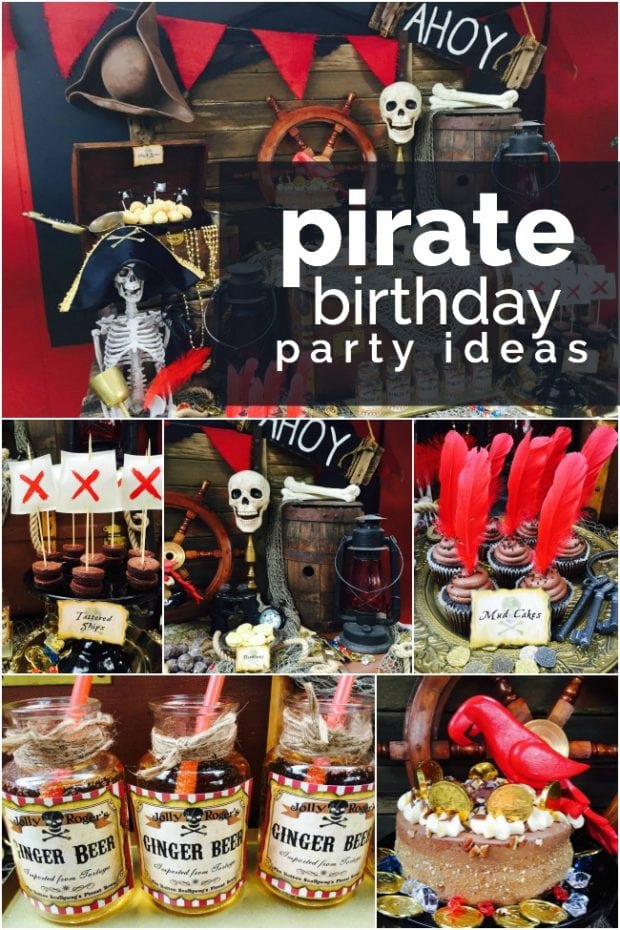