Today: Get My No Fail, Easy Cookbook Series for 60% OFF
Buy Now
A boy’s camping birthday party is a terrific theme idea. This particular party was done as an overnight, backyard camp-out; the kids look like they had a blast!
Stephanie, of Creating Couture Parties, designed this celebration at her 8-year-old son’s request. She found terrific decorating supplies that enhanced the camping theme. Make sure you notice the delightful fondant camping cupcake toppers! Stephanie amped up party anticipation for guests with s’more kit invitations.
The good times lasted throughout the camp-over, the cereal breakfast bar and while taking home camp lanterns and water bottle favors.

When party guests arrived at Carter’s Camp-Out, they each received glow sticks, a cute packet of sparklers and anti-bug bands — here’s a hostess who thought of everything! Since this party was co-ed, boys and girls had their own tents.

Isn’t the dessert table terrific? I love what Stephanie did here: cardboard letters were covered with glue and birdseed. That’s a great, rustic look that would be simple to do.

A faux deer head and a giant twig leaf are also mounted on the wood pallet backdrop. To keep things interesting, food is presented on birch log pedestals and an additional pallet creates another serving level.

Funky little owls and a squirrel are perched amongst the food.

One end of the table featured a trail mix station. Hand-stamped with owls, the muslin bags were at the ready for make-your-own trail mix. Themed cookies and cupcakes, by It’s My Party, are really charming.

The fondant toppers were in the shapes of all sorts of camping paraphernalia including: tents, flashlights, campfires, RV campers, bears and squirrels.

Besides doing the sparklers, the kids made their own popcorn and watched movies under the stars — bet they made lots of fun memories at this birthday camp-out!

Love the look of this camping themed birthday party? Get it with these ideas we’ve gathered by the crew at Spaceships and Laser Beams.

Plus, don’t miss out on 23 Awesome Camping Party Ideas… 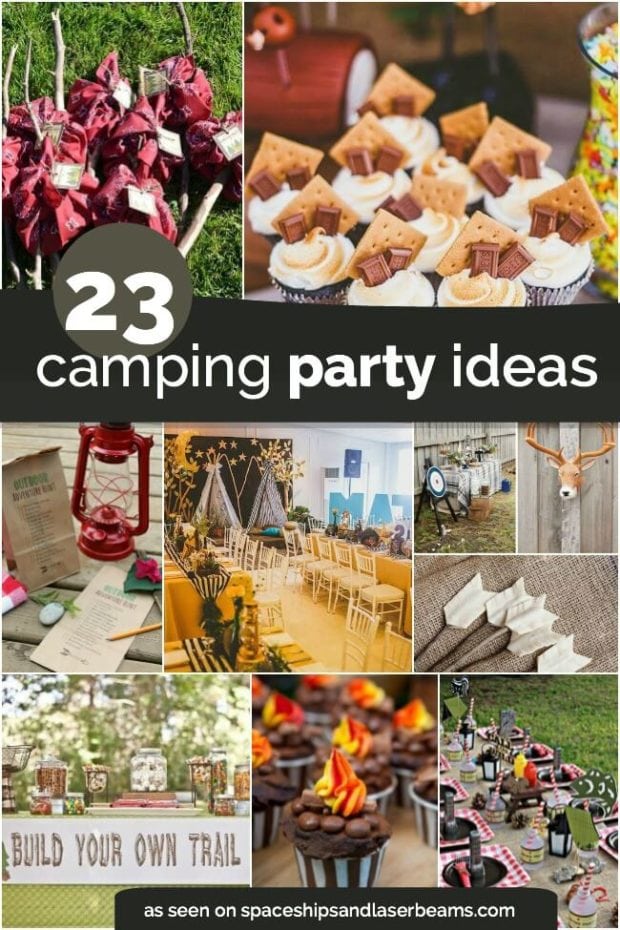