It’s a fact that boys love trains! This train themed boy’s birthday party by Sherry Turley, of Sweet Festivity, put a fun, modern twist on the theme for her son’s second birthday.

While taking inspiration from her son’s favorite blue locomotive, Sherry chose to keep her printable designs free of characters.

Fun train themed elements were incorporated throughout her styling with clever food choices, a fueling station for quenching thirst and a baggage claim area for party favors.

Sherry even shares an economical backdrop decoration idea made from an easy party supply that you’re sure to love.

Dessert table backdrops don’t have to be complicated or break the bank.

Some of my favorites included “lumber” pretzels and chocolate “coal” malt balls.

I love how the cupcakes were displayed on wrapped boxes for height; such a great, uncomplicated display idea!

Cakes just don’t get any cuter than the train inspired version by All Things Cake.

Part of me expects a fondant train to come chugging through that tunnel at any moment.

Chocolate candy bars rounded out the dessert table, and made an easy “grab and go” offering for any guests who needed a quick sugar fix.

The beverage area was designated as the “fueling station”. How perfect is that?

Each bottle of “engine fuel” had a coordinating chevron straw from Sweets & Treats Boutique or The Swiss Miss Closet.

A darling dining table was set in the predominantly aqua and lime color palette.

I love the railroad crossing centerpiece; another idea that packs a lot of theme-coordinating punch.

Notice Gordon nearby, also a fun addition to the centerpiece.

Sherry included a copy of the Railways books (precursor to the Thomas trains) that guests could sign and leave a little note for her son. What an awesome keepsake!

A “baggage claim” area was easily accessible on the dessert table as a “tank you” favor for guests. Adorable polka-dot gable boxes from Polka Dot Market were on hand for guests to fill up with take home treats.

For birthday boys who love trains and moms who love quirky fun, this bright and modern train party hits just the right balance for a joyful celebration!

Be sure to check out more boy’s train birthday party ideas.

Plus, you wont want to miss out on 25 Train Themed Birthday Party Ideas… 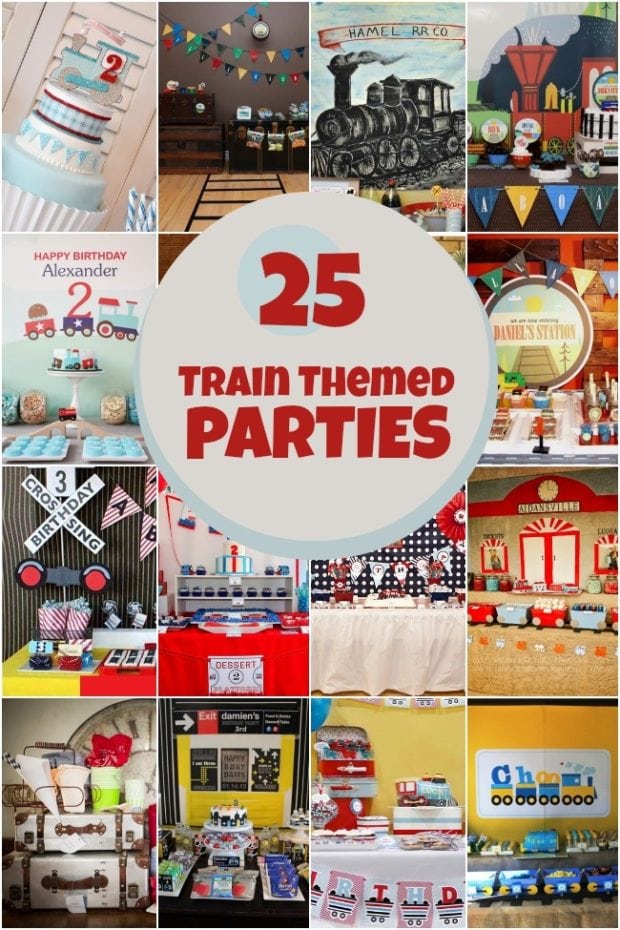