Lego and ninja lovers will give this boy’s Lego Ninjago birthday party two thumbs way up!

Maureen, of Anders Ruff Custom Designs, styled this amazing party for her Lego Ninjago-loving son’s 7th birthday. Using a party palette of red, black, white, yellow and a hint of green, Maureen gave an Asian feel to her party space by pulling in traditional Asian décor elements and combining custom designed printables and an invitation she made for this theme.

You will flip over the coordinating desserts, including an impressive birthday cake and Ninjago inspired cupcakes! Be sure to focus in on all the great party games and party favor ideas too.

You will get a kick out of the cleverness of each and every detail captured by Becca Bond Photography.

Maureen is a master at transforming her entire party space to create an experience for party goers: the party mood was set from the moment guests walked in the front door.

They were greeted with real bamboo shoots and paper lanterns of all different sizes that hung over head.

Because dressing the part is a fun party trend, the kids each received a personalized dragon shirt with a ninja star on the backside, as well as a ninja headband upon arrival.

In an inspired floor seating choice, Ikea pillows were placed on the floor.

She stitched dollar store placemats together for a great DIY bamboo runner.

Impressive place settings consisted of small, red plates and a Chinese takeout container which housed lunches for each guest. Chopsticks and takeout boxes were dressed up with printable labels.

Small ceramic dishes sat beside each plate and held a single piece of candy sushi, which rested on patterned paper.

Beverages in plastic bottles had coordinating labels and straws.

If you want a dynamic dessert table, this is it! Using a Chinese screen as a backdrop was brilliant.

Maureen carried the bamboo elements onto the dessert table by flanking the screen with large black vases containing the shoots.

More hanging paper lanterns tied the dessert table to the other party spaces.

After scouring Ikea for dessert display pieces with an Asian flair, Maureen scored bamboo-like organizing caddies that she stacked to create tiered dessert trays in the middle of the table.

The cake, by Got What It Cakes, made a stunning centerpiece with incredible edible detailing like ninja stars coming out of the sides!

In addition, vessels were filled with chocolate covered Oreos.

My absolute favorite dessert table item had to be the candy sushi Maureen made. It was a mixture of rice krispies, marshmallows, Swedish fish, gummy rings, Starburst, Airheads and orange sprinkles.

She even used some of the green grass they use in real sushi takeout containers.

They look amazing, packaged in clear containers, tied with twine.

At a separate “takeout” candy station guests could fill up Chinese takeout containers with treats to-go.

A printable dragon poster was the perfect backdrop.

An eye-catching ninja star shaped printable banner was affixed to the front of the candy buffet.

I love that Maureen purchased fake Chinese money to award children during game time so they could use it to “purchase” takeout treats.

An action-packed party theme requires a variety of favors and activities.

This party was nunchuck full of them! Maureen prepped printable Ninjago coloring books that guests could take home, along with Lego shaped crayons from Posh Paper Creations.

They also had a ninja star throwing game using rubber ninja stars she purchased online. She made a target out of Styrofoam and a printable poster.

Keeping with the Asian vibe, Maureen planned a fortune cookie toss; she added numbers to hanging takeout boxes from one of the folding screens.

Guests made points for each cookie they successfully tossed into each open-topped box.

Finally, there was a custom piñata. The little ninjas used bamboo sticks to take hits at the piñata. So fun!

Plan a Ninjago birthday party with these party supplies:

Plus, don’t miss out on 23 of the Best Ninjago Party Ideas… 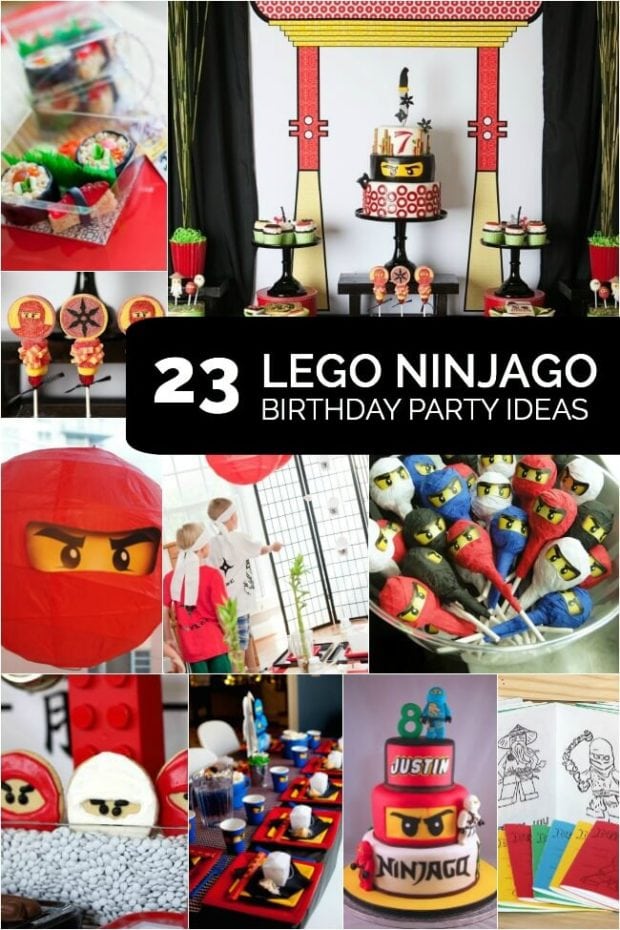