In fact, he wakes up every Friday morning, just to watch the garbage man pick up the garbage barrels! Likewise, every third Tuesday of the month, her son is glued to the front window waiting for the arrival of the street sweeper.

As Michele knows, a great party is often inspired by a great passion or interest of the guest of honor. However, you won’t have to dig around in any garbage cans to see the amazing theme coordinating garbage truck party decorations, cupcakes, cake pops and other seriously sweet treats! Guests might have left with some of the cleverest garbage truck inspired party favors ever!

We’ll let you be the judge as you peruse the crisp images captured by Micheles husband, Garrett.

You may be wondering how guests are entertained at a garbage truck party (I know I was curious). Michele unearthed some pretty amazing ideas. Not only was a widely popular bounce house on hand, but Michele planned a “turn your trash into crafts” station and also had multiple garbage trucks and street sweeper toys for endless amounts of play.

My absolute favorite activity included the garbage truck Michele custom made by repurposing a Little Tikes toy with added foam core board. The details are unbelievably cute! The children loved taking turns riding around in this pint sized garbage truck.

The garbage truck inspired dessert table was spectacular! Michele tied in her theme with a recycled newspaper backdrop, and also reemphasized it by including theme coordinating treats.

Exquisitely detailed cookies by Cookievonster stole the show! Has a garbage truck or street sweeper ever been so captivating?!

Of course, dessert table staples and party favorites were also a part of the “garbage” to be found among the desserts. Cupcakes were topped with printable garbage truck birthday embellishments.

A simple, round cake was topped with impeccably detailed fondant replicas of a garbage truck and street sweeper by Mimicafe Union.

In addition to the eye pleasing treats, I love Michele’s use of printables that added continuity to the dessert table.

The large, custom sign highlighting important facts about the guest of honor was a fabulous accent and coordinated nicely with the food labels and other printable décor, what a fun keepsake, too!

Perhaps my very favorite detail from this garbage truck party is the favor idea. Michele put together darling mini garbage barrels customized with each guest’s name. A white trash bag was inserted and filled with a handmade street sweeper puzzle, trash pack magnets and candy.

Talk about turning trash into treasurethis party did just that! What a memorable celebration for one garbage truck and street sweeper loving little boy!

Be sure to check out more boy’s 5th birthday party ideas here: 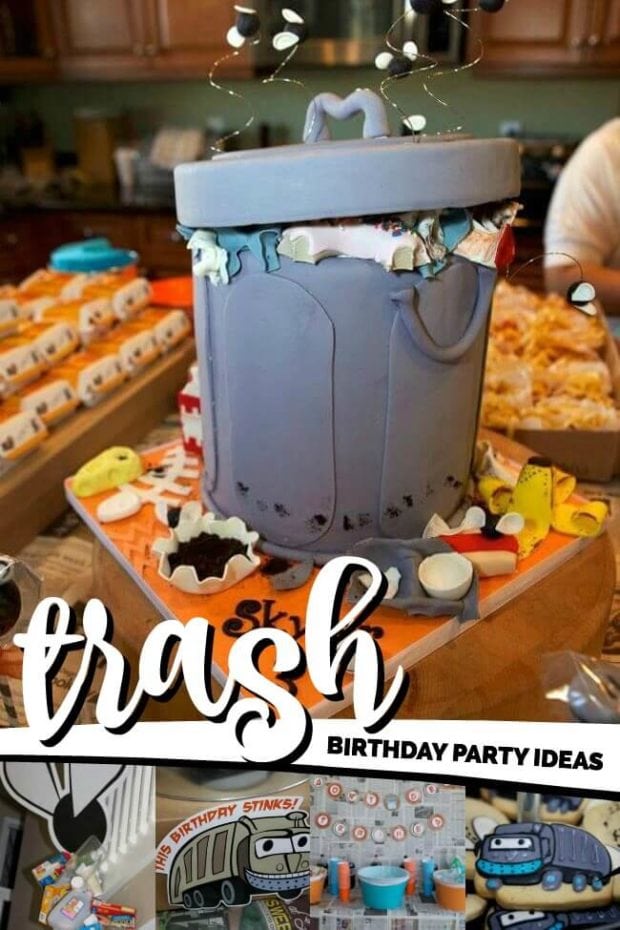