What do you get when you combine Legos with Star Wars? You get this: an out-of-this world boy’s Lego Star Wars 6th birthday party.

The best news? You won’t have to go to a galaxy far, far away to see the creatively executed details of this party! You can focus in on the galactic goodness from the comforts of your own home.

From the impressive Star Wars Lego inspired invitations and party supplies to the impactful decorations to the totally cool Death Star cake (that will knock your socks off) and party games, the force is strong at this party.

Planned and photographed by mom, Emmanuelle of Partyummy, would you believe the inspiration for this party began when the guest of honors father gave him a Lego Star Wars Darth Maul key chain?

From there, a love of the Star Wars universe developed from watching Lego Star Wars movies.

The outside “jacket” looks like a Lego brick and the ticket style invitation inside takes things to the “dark side” with Star Wars inspired type and characters.

Always a party favorite, and one of Emanuelle’s favorite elements too, the dessert table was a show stopper.

With a Star Wars themed backdrop and banner, oversized Star Wars figurine and a replica Death Star cake complete with LED lighting–you’ll see what I mean.

Even the drink dispenser was costumed in an R2D2 beverage wrap for the occasion.

One of the most creative ideas Emanuelle executed was R2D2 crepes/pancakes! Just look at the detail.

She shares that squeeze bottles with the various batters and cooking the crepes on very low heat were her best tips for achieving such masterpieces.

Did I mention Emanuelle made all of these ultra-cool treats herself? The creative force is strong with this party planning momma!

If you like for family and friends to dress the part at your parties, you’ll love the custom Star Wars shirts featured in this party.

Emanuelle kicked the cool factor up a notch by crafting her own Star Wars Lego heads, too.

I’m totally impressed. Just look at the details! Darth Vader, R2D2, Yoda, a Storm Trooper and Darth Maul all made an appearance at the party. So fun.

When this party episode came to a conclusion, you better believe cool party favors were in store. I can’t think of a more awesome party favor than light sabers filled with candy–what a fun take away.

Plus there were custom bracelets with guests’ names. How cool that a Star Wars inspired font was used to tie into the theme?

Jedi Levi had such an amazing time at his Star Wars 6th Birthday party! I can’t wait to see what his next birthday episode brings!

Plus, check out these 23 Star Wars Party Ideas We Love… 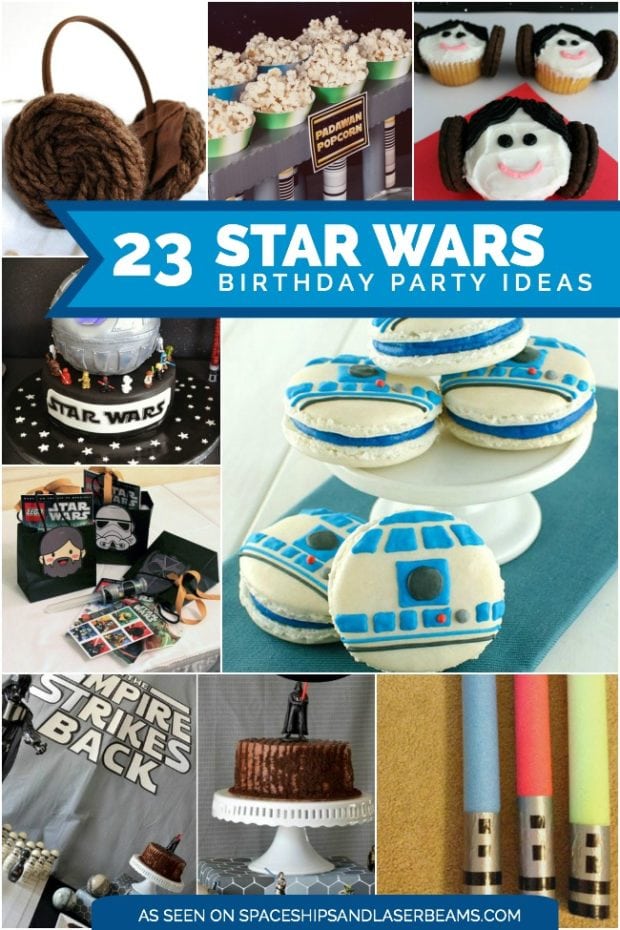